I had a couple of attempts at making some wristwarmers this weekend as I only had short pieces of time rather than a whole day to get stuck into a larger project. I cut out two rectangular templates as I hadn’t the space to make them as one long rectangular piece. I sized them roughly 30% wider than my arm and tapering slightly towards the finger ends.

Here’s the layout and finished product of the first pair – they ended up like cardboard, really fulled hard. Perhaps this was because I was using the microwave to heat them up and slightly ‘overcooked’ them. They were too hot to handle at one point! I needed so much shrinkage to get a fit, so I guess I made the templates too wide. 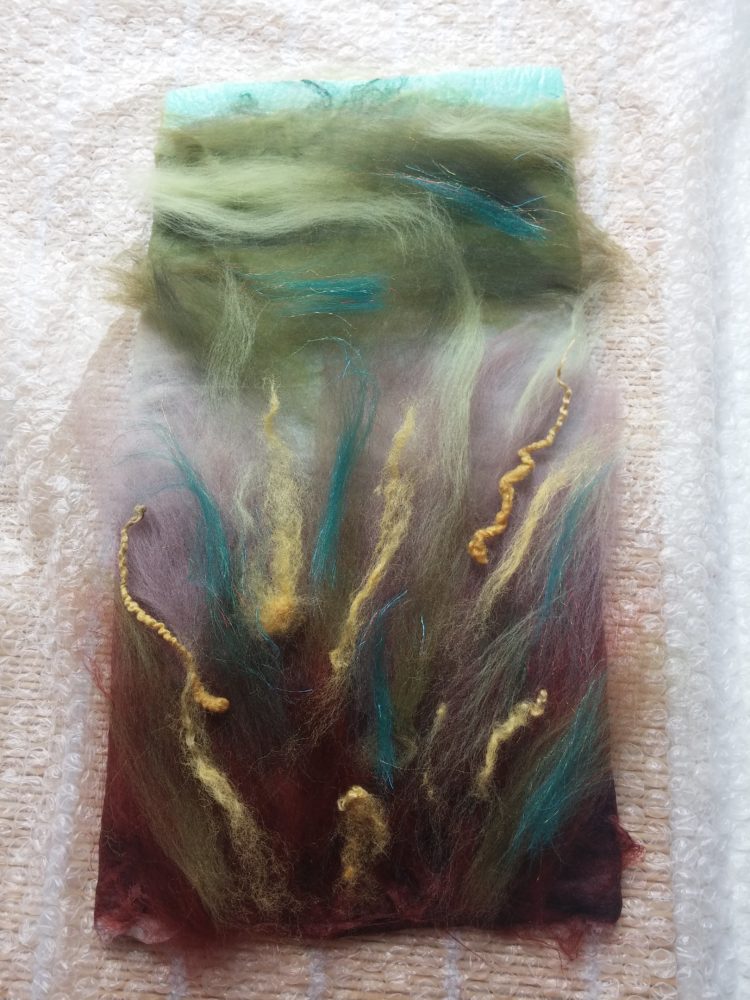 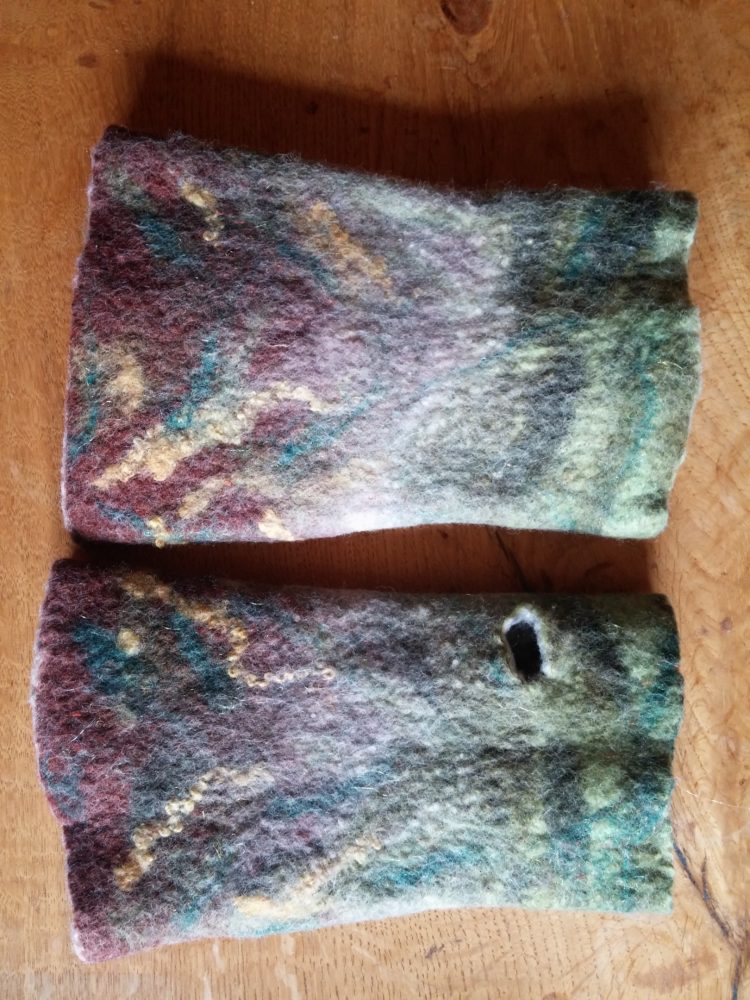 So the next day I decided to try another pair. I trimmed down my resists so I wouldn’t need to work so hard to get the shrinkage to fit, and hopefully then the felt would be softer and have a little ‘give’.

Laying out the fibres is my most favourite part as it’s here that I get to play with creative ideas, patterns and textures. Time just drifts by as I get lost in the colours and fabrics, allowing the design to unfold rather than setting out with a clear intention in the first place. I tend towards the ‘kitchen sink’ method of throwing everything into each project. As I was laying out a leafy design for the insides it occured to me that I could easiy make them reversible. Here are pictues of the inner layer on the resist. I’m using merino wool, sari silk and some gorgeous mohair yarn. 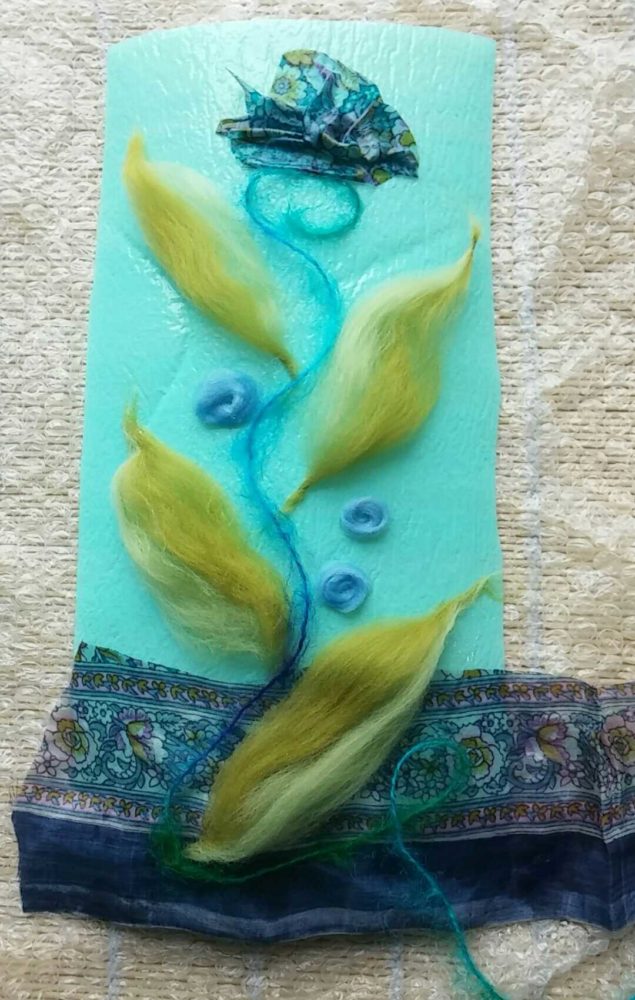 I added two white wool layers over this before laying out a couple of blue layers. I had an idea for this side to be much more glam with some gold bling which came from this gold fabric. 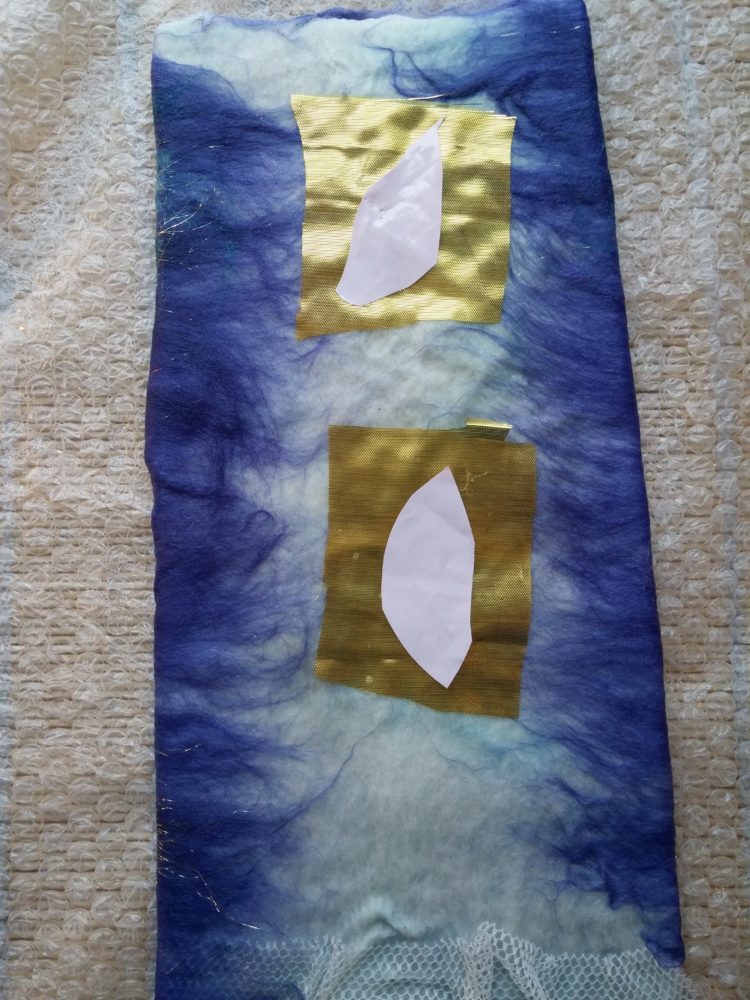 I finished off the outer layer with some angelina fibres in gold, glittery merino yarn and a few little circles of lighter blue merino tops. Oh yes, and some lace! 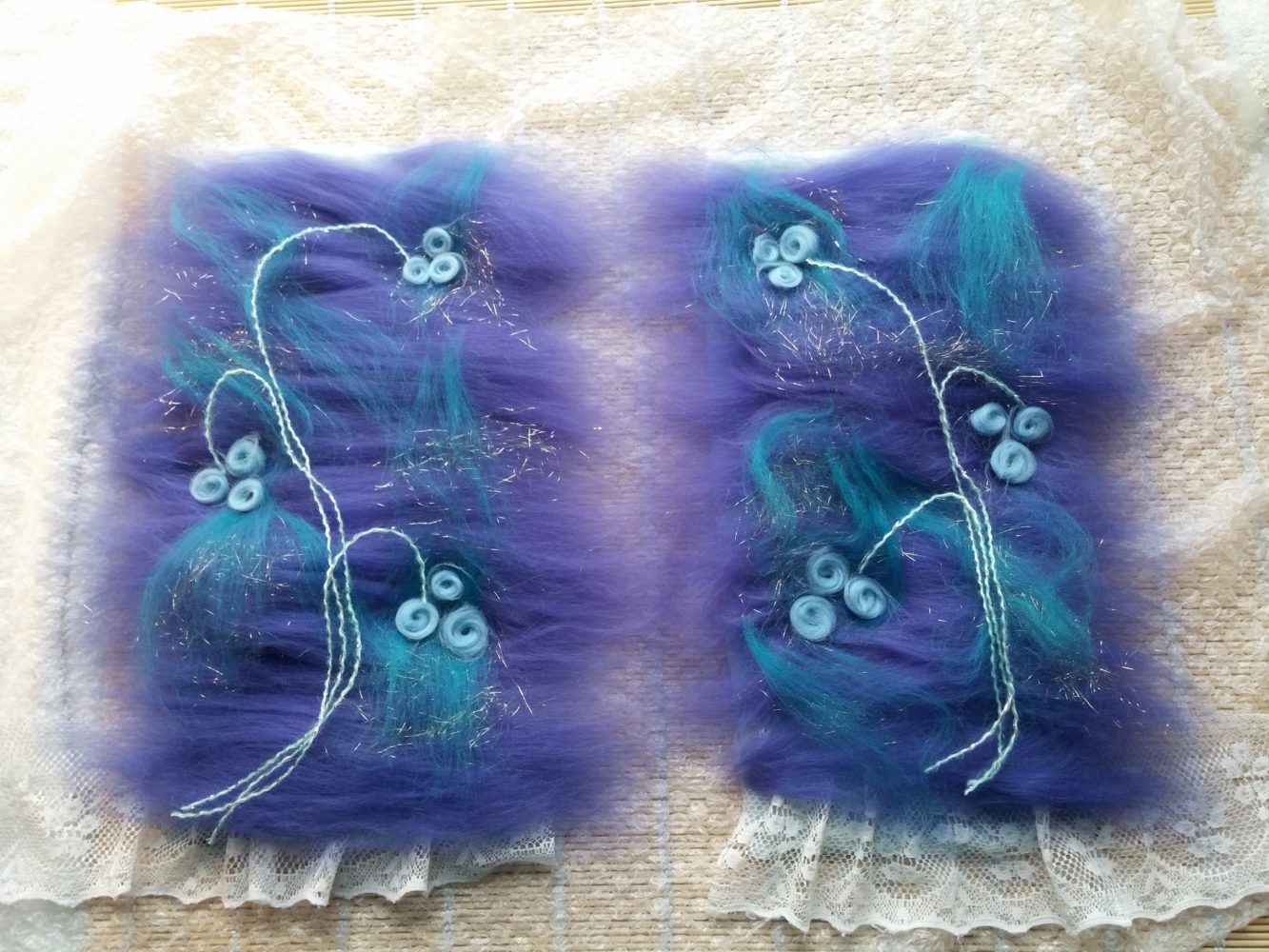 After felting and fulling (without the microwave as all those metallic fibres would spark and burn the wool) to a point where they wouldn’t fit on my arm, I used a rolling pin to shape the wrist sections so they are slightly narrower. They were intended as a gift for someone who has much slimmer arms than mine but I’m not so sure they’re quite right as they didn’t shrink so much lengthwise, so I might put them in my Etsy store later. Someone might like them for Christmas.

Here are the finished mitts showing both inner and outer designs. 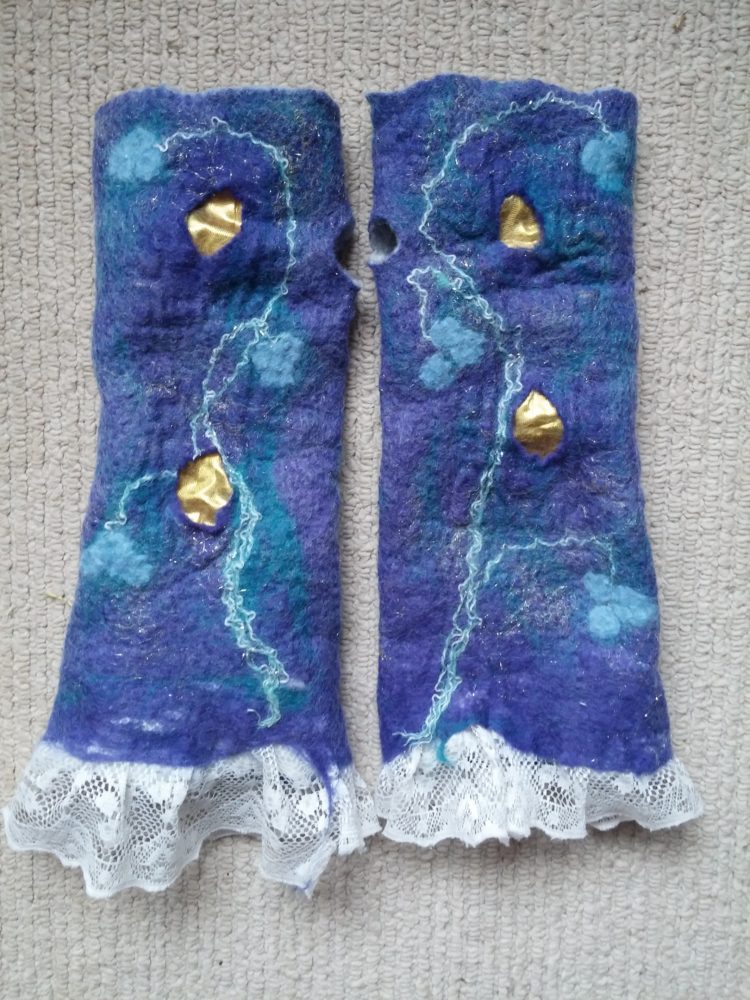 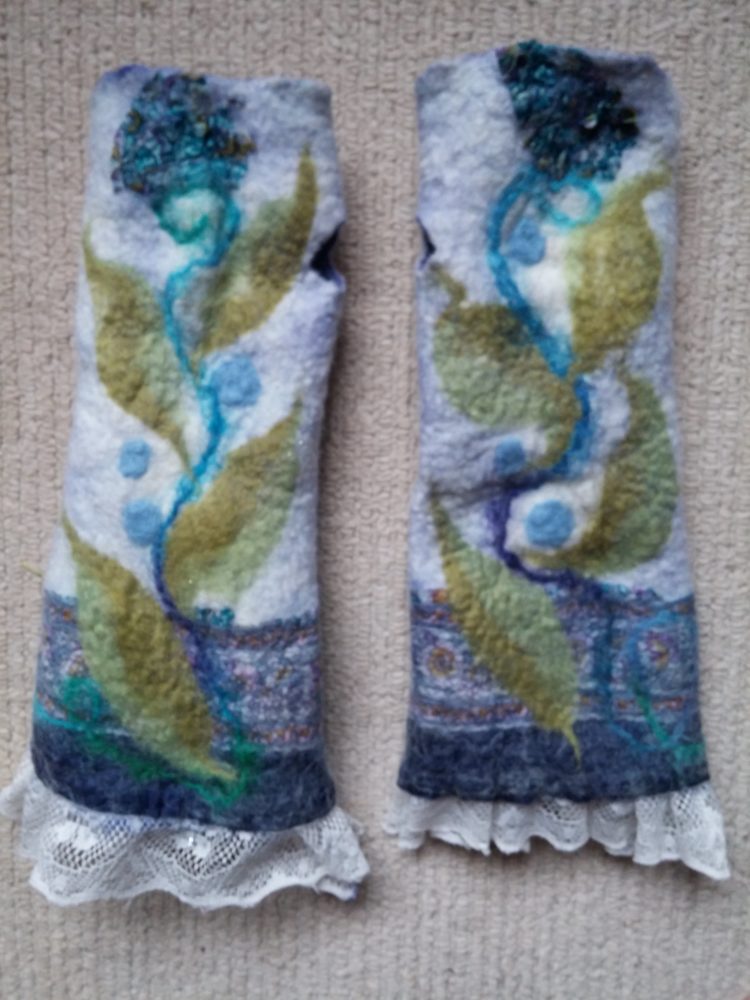 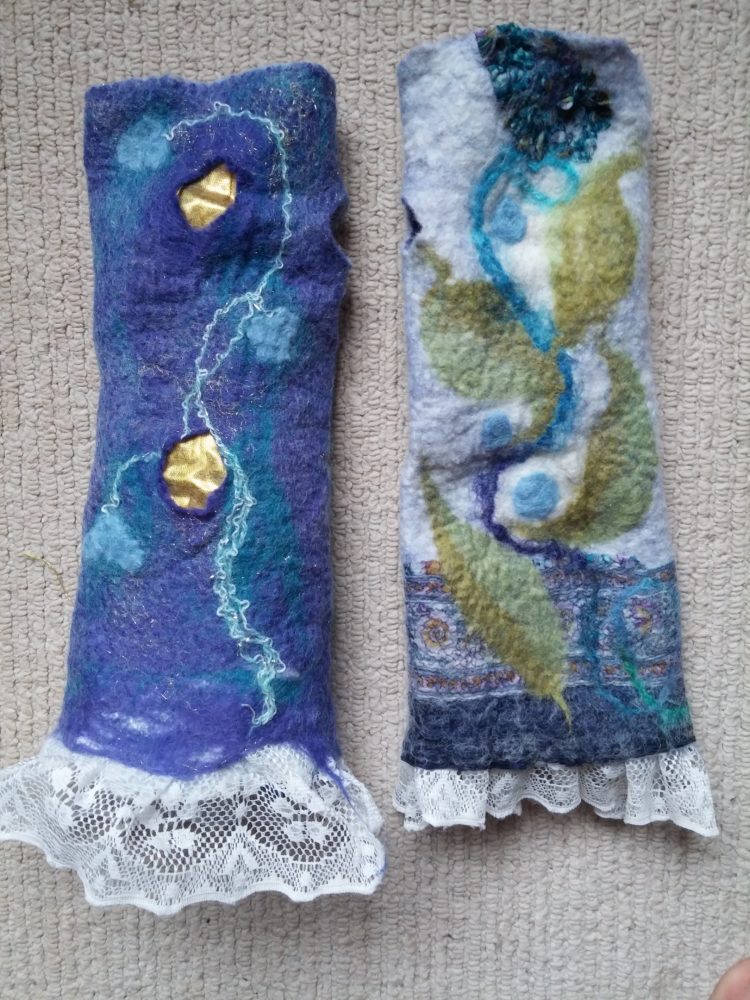