Along the bottom of the sand cliffs that form the coastline just north from where I live, there are sometimes revealed expanses of what look like rock, but are revealed to be compressed clay or sand on closer inspection. They are quite sticky and slippery to walk on and crumble easily giving one the illusion of great strength to have a ‘rock’ shatter with just one kick! Sometimes they disappear, covered by the shifting sands. Recently there has been a huge and quite shocking degree of erosion taking many whole trees and the footpath I used to walk along down into the sea, to be distributed along the beach and scoured into scultural shapes.

I love to imagine that the rocks are another country, and that the cliffs and inlets would be huge were I to rescale myself to someone just 2 inches tall. Their multicoloured layers fascinate me along with the organic flowing shapes where the water washes them and forms little pools. 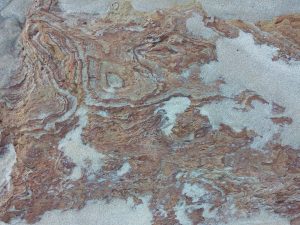 I decided to have a go at creating something in felt that would recreate this layered look, inspired by a post on the Felting & Fibre Studio proboards which Teri had entitled The Grand Canyon.

I regularly collect stones and shells from the beach, so I thought it would be quite appropriate to use some of those for resists, along with some cutout pieces of laminate flooring underlay. I laid out 2 layers of undyed merino then added some fine drafts of various colours or red, brown, yellow and orange.

Next I laid down some organza and silk pieces and a piece of gold metallic fabric on top of which I began to place the stones and flat resists. 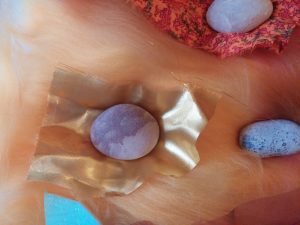 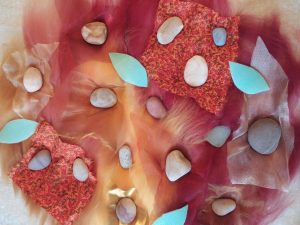 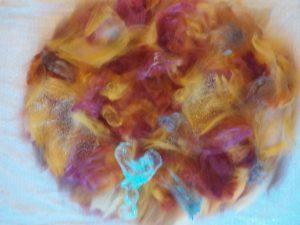 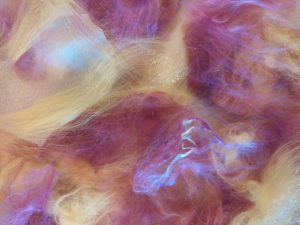 I then built up 5 or 6 layers of wool, each layer a different single colour. My final layer was the remains of some wool I had blended on my hackle which comes off the combs nicely crinkled and textured. Then I added some silk fibres, and more pieces of organza taking care to add little wisps of wool around the edges.

By now I had a very large and thick piece to wet down and rub. Getting around all those rocky resists, trying to ensure that everywhere had equal attention was tricky. Surprisingly it was one of the flatter areas that didn’t felt too well, the wool fibres refusing to migrate through a piece of gold organza. Eventually it held together well enough for me to flip it over and rub it from the back. There was no rolling for this beast!

Dropping and throwing it was strangely satisfying – a wet heap of wool filled with rocks makes for quite a lot of noise on top of a wooden table. Once I was satisfied it was as fulled as I wanted I began to cut around the rocks and flat resists. At one point I was considering leaving the stones in place but I wasn’t seeing enough of the different coloured lower layers so I removed them and cut the top layer back more, angling the scissors to make a broad cut across the top layers.

I found that rubbing the cuts tended to blend or obscure the layering effect, so I just cut them back again. Then I took the scissors to the other sections and carved off varying amounts to reveal different colours. This became quite addictive, although very wearing on my fingers – I had a numb thumb for a couple of days! I think using a hobby knife might have been easier.

I’m still feeling a bit ambivalent about the result. It’s not what you’d call beautiful but it is definitely striking and unusual as a piece of felt and quite similar to those almost martian landscapes I’d scrambled over on the beach. 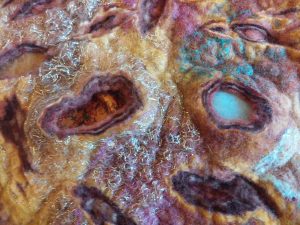 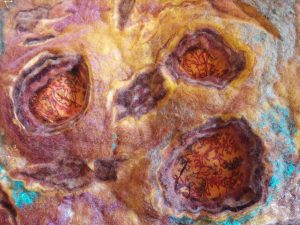 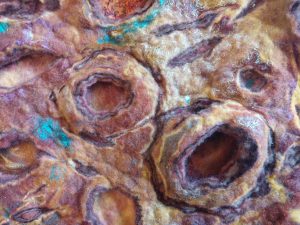 I may yet add some beading inside some of the craters as they’re like mini rock pools and should have weird and wonderful creatures waiting to be discovered inside. I have some shells salvaged from an old necklace which might look good if I decide to stick with it. I will definitely be trying this layering and cutting/carving technique on other projects though. 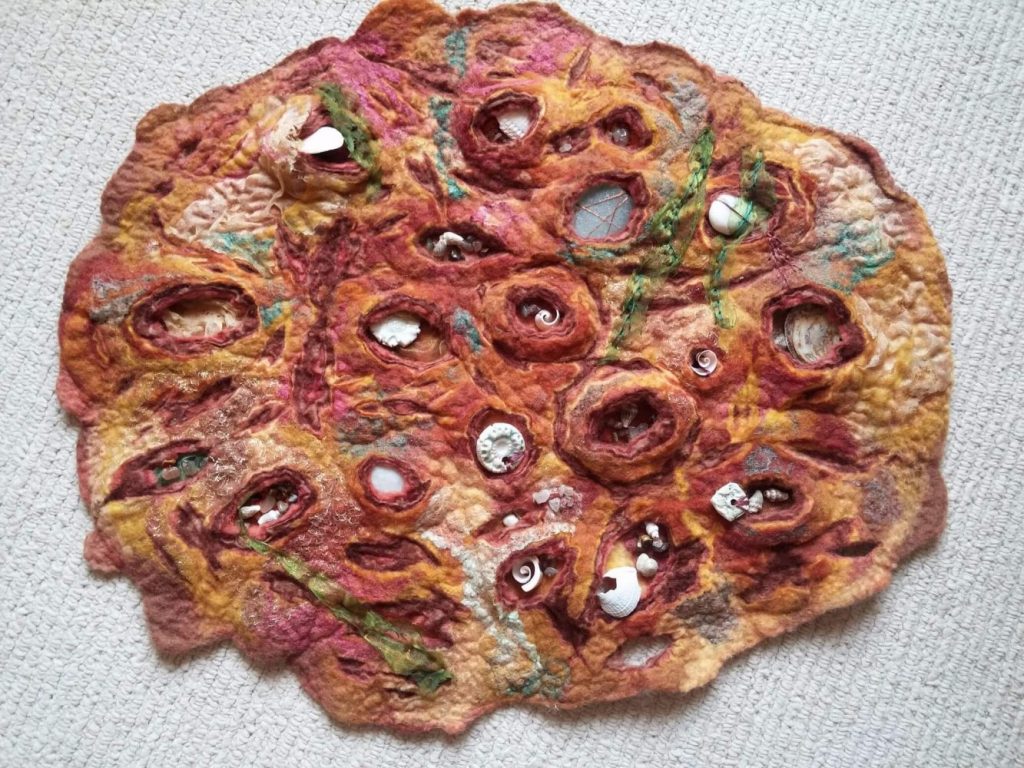 I’d love to hear your comments on this piece and if you have any ideas what I could do with it next.