It’s been quite a while since I last posted, and to be honest, in these warmer months, felting has been slow. Sometimes, even in the UK, it is just too hot to be rubbing and rolling wool! This idea for a golden hare was inspired by some paintings I saw locally of hares with a golden moon.

I do enjoy not having to work to regular rectangle or square shapes when creating wall hangings so the first was roughly semicircular. I used some blended wool and silk for the greenery and added a special angora/angelina mix for the moon which sparkles lilac. It was then machine embroidered and applique silks added, with 4 little silver star beads. 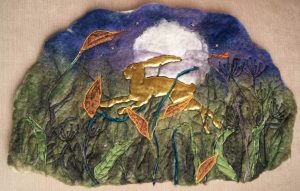 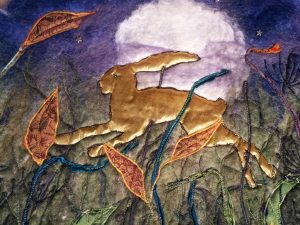 For the second golden hare I chose a floral gold brocade fabric. The moon is silk in this one as I prefer the natural sheen from silk laps. 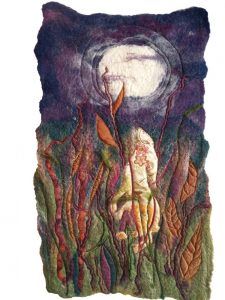 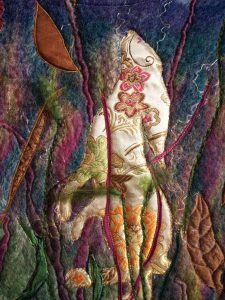 And lastly this one, in which I added some large patches of purply pink blended silk which I then machine embroidered with swirls and flower patterns. 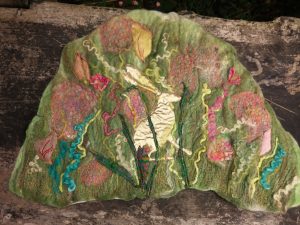 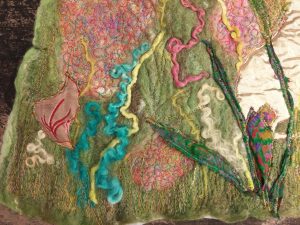 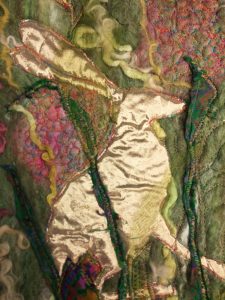 As I was working on these three pieces, and going through some interesting times of personal change, a friend remarked on how the hare is rich in symbology. So I did a little research  – well, a Google search! – and here’s an interesting article should you wish to know more. Apparently myths about hares are as widespread across the earth as are our stories about a gigantic flood!

“Man has for centuries respected, even feared, the hare because of its perceived powers of solitude and remoteness. Active at night, symbolic of the intuitive, and the fickleness of the Moon, the hare was an emblem of unpredictability. Like the Moon, which always changes places in the sky, hares were full of mystery and contradictions. The moon was perhaps the most powerful symbol of birth, growth, reproduction, death and rebirth. The hare was endowed with similar earth-bound powers.”
https://h2g2.com/edited_entry/A2465426

These are now for sale in my Etsy shop (SOLD)