I think one of the most enjoyable aspects of creating with felt is making wearable art – it has function, purpose and beauty and can be appreciated by many people, not just the wearer. So far I’ve made bags and scarves and now its time to explore hats.

I attended a workshop on hat making by Bridget O’Connell (feltbybridget.com) and had a really enjoyable and informative day out in the wild and windy wet wastes of Blaxhall. Not only did I learn how to make two different styles of hat, but also some really useful shortcuts and tips for quicker and better felt-making. These are all made in one piece using a resist – no stitching.

So here are my first two hats, both made in a day – in fact the beret only took 1.5 hours from start to finish. 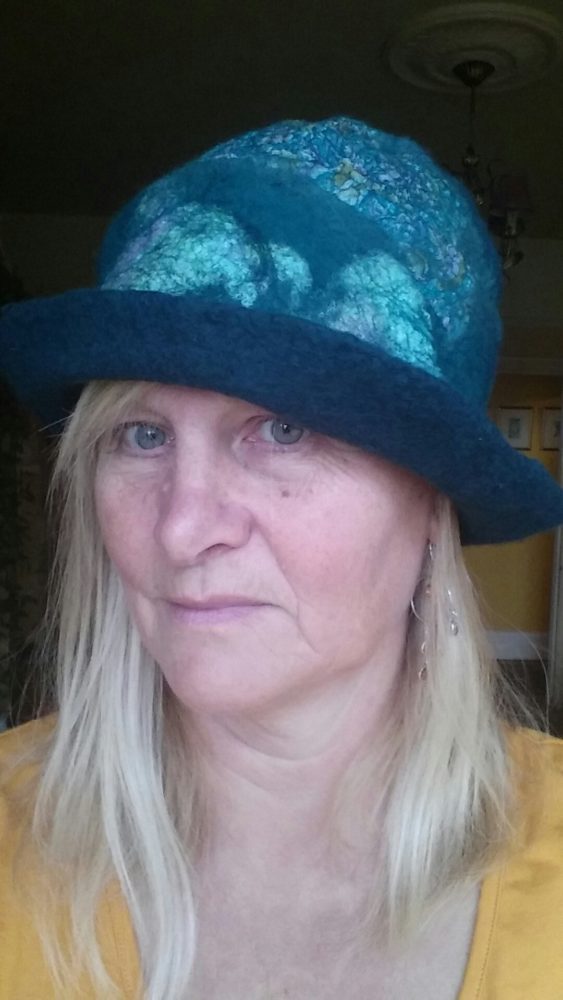 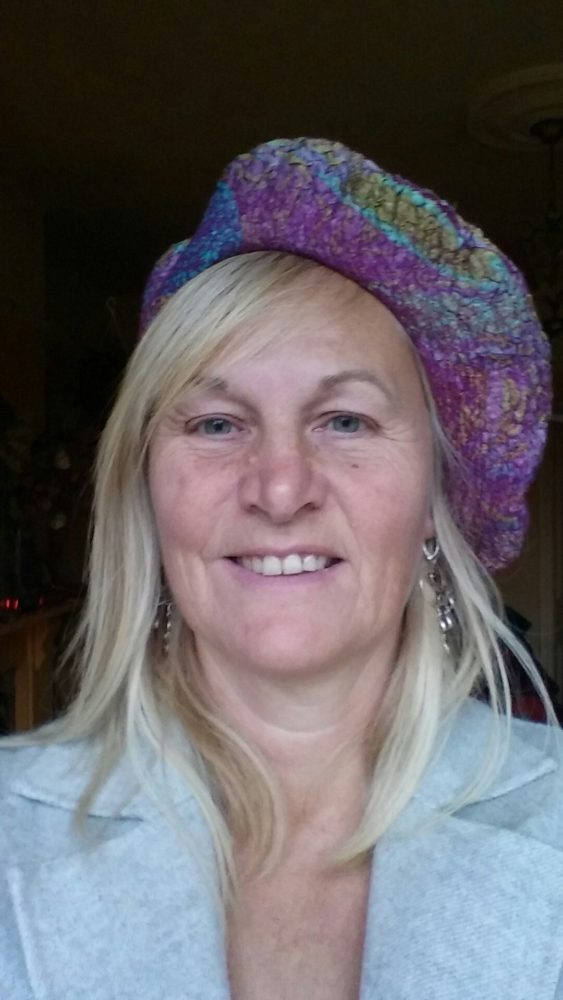 The blue hat has some pieces of floral sari silk and gorgeous almost luminescent silk from Oliver Twist. Once the hat was formed and shrunk to the right size the fun was had in folding the crown into ridges. Bridget advised following where the material naturally seemed to go, and mine ended up as a spiral from crown to brim. Pinned it place whilst wet, these ridges and folds then dried and became permanent.

The beret was made from two circles of silk and two very fine layers of merino wool. It took me a while to get the right size opening for my head – trying on a soggy wool hat for size is not recommended for anything other than having a giggle! I’ve since learned to put a plastic bag over my head when trying on and to stand on a towel. Perhaps I’ll invest in a hat form one day or make my own, but for now it’s my own head doing the job.

Here are some other shapes and styles that I’ve experimented with since the workshop. 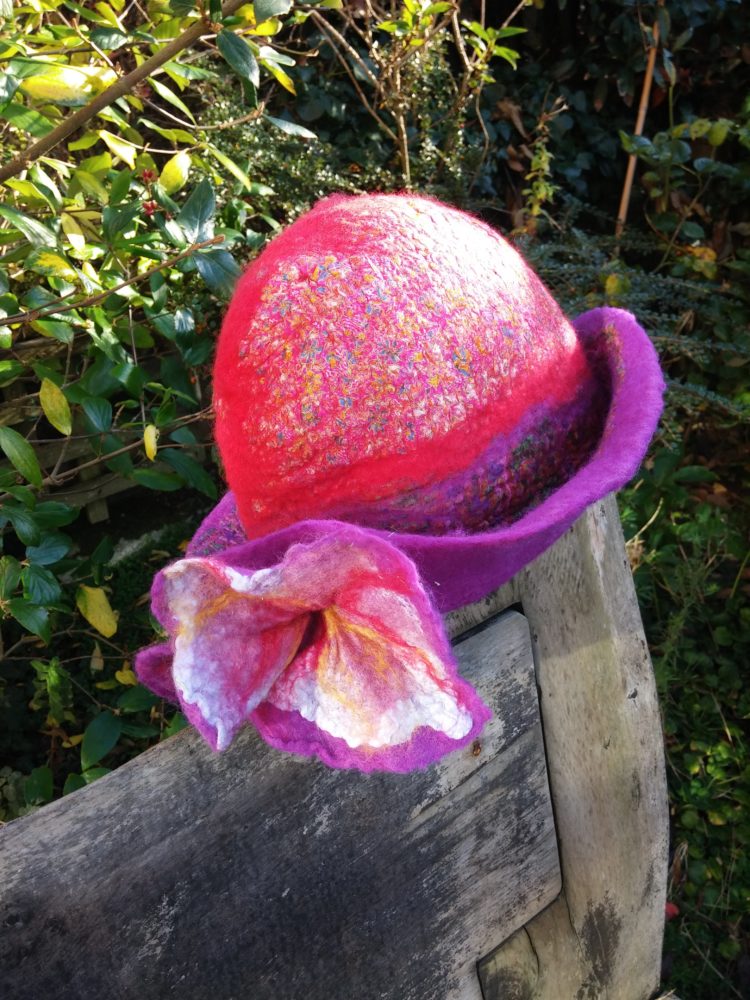 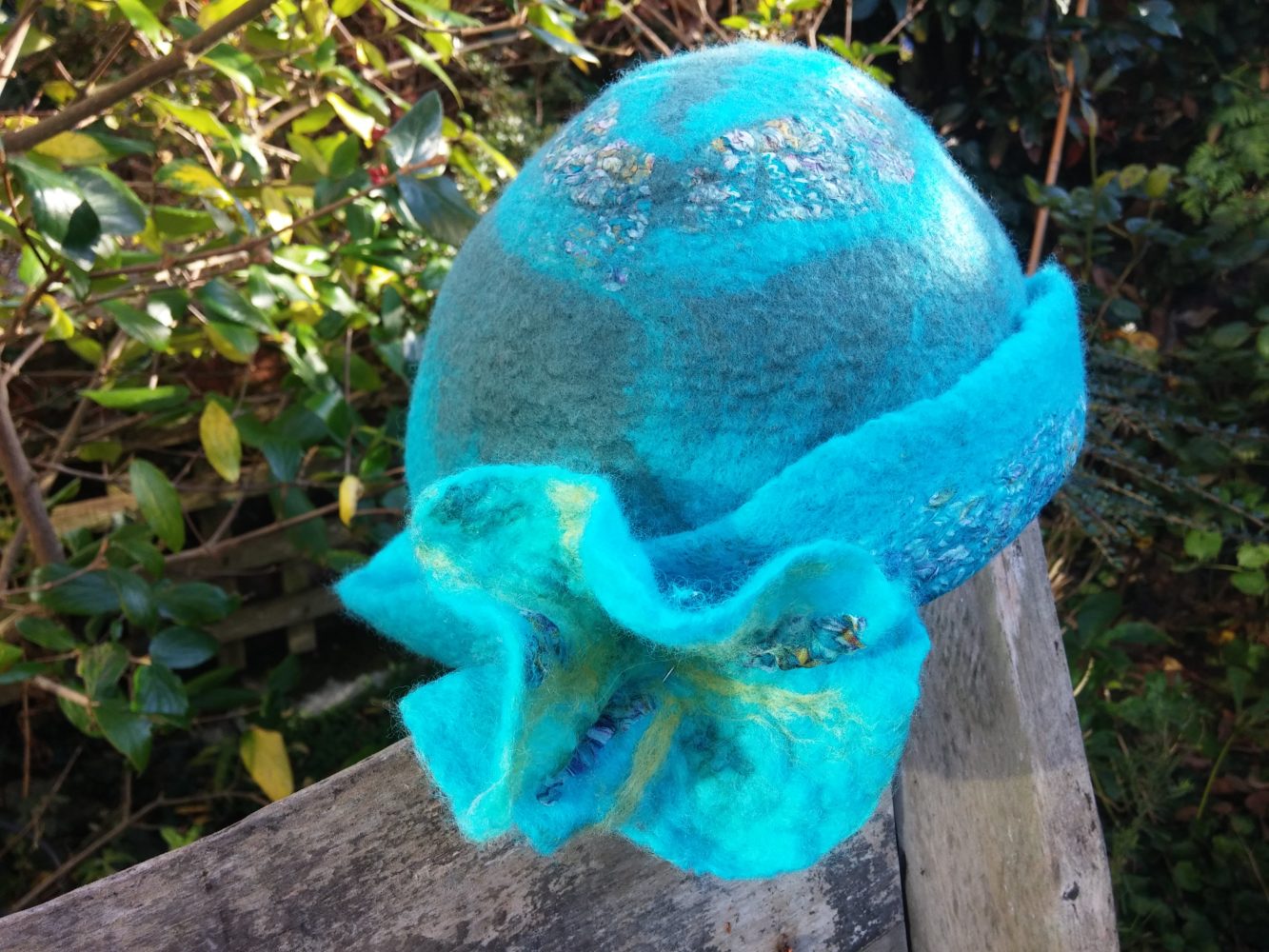 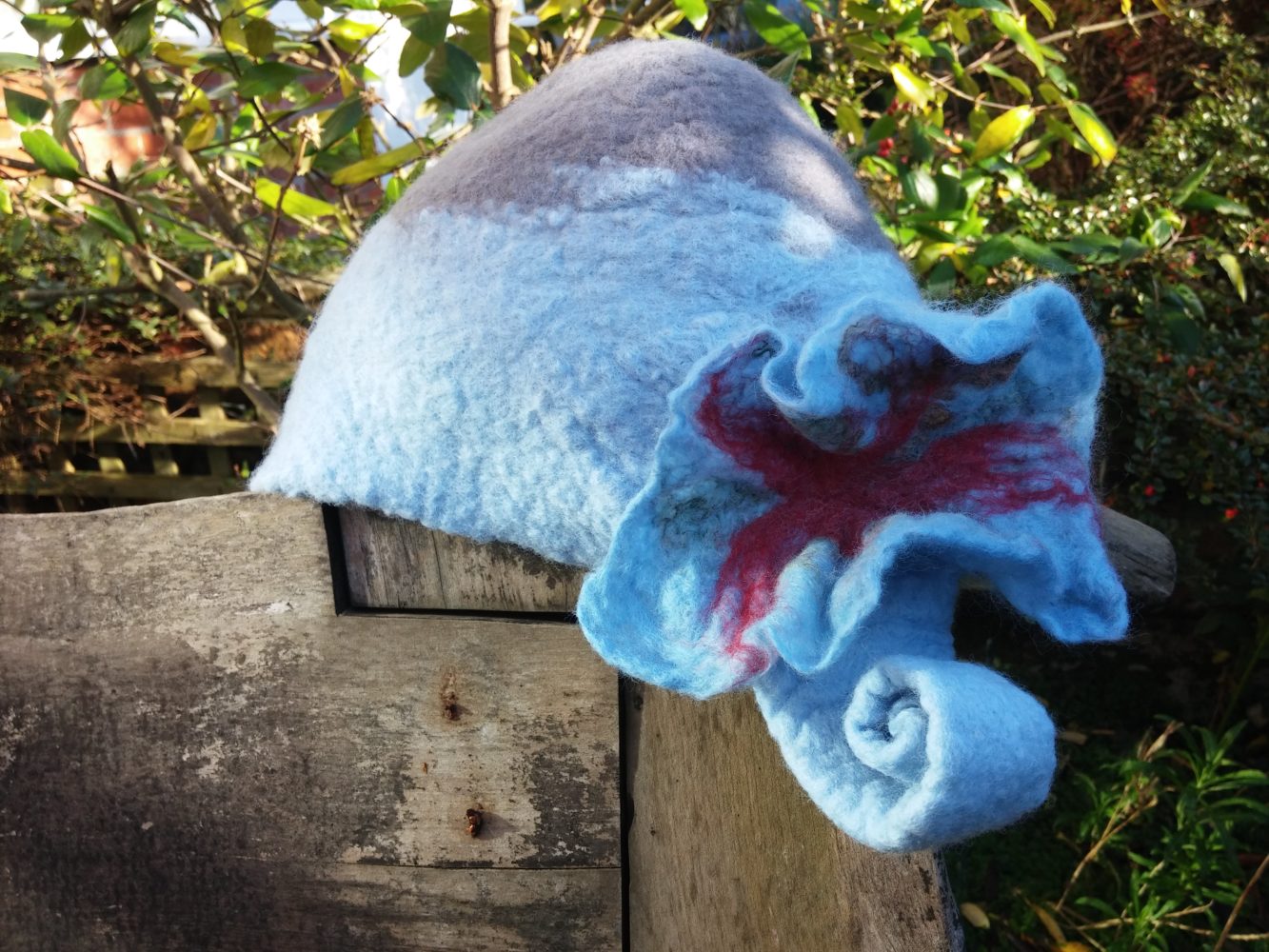 Blue and grey felt hat with curly tail and flower 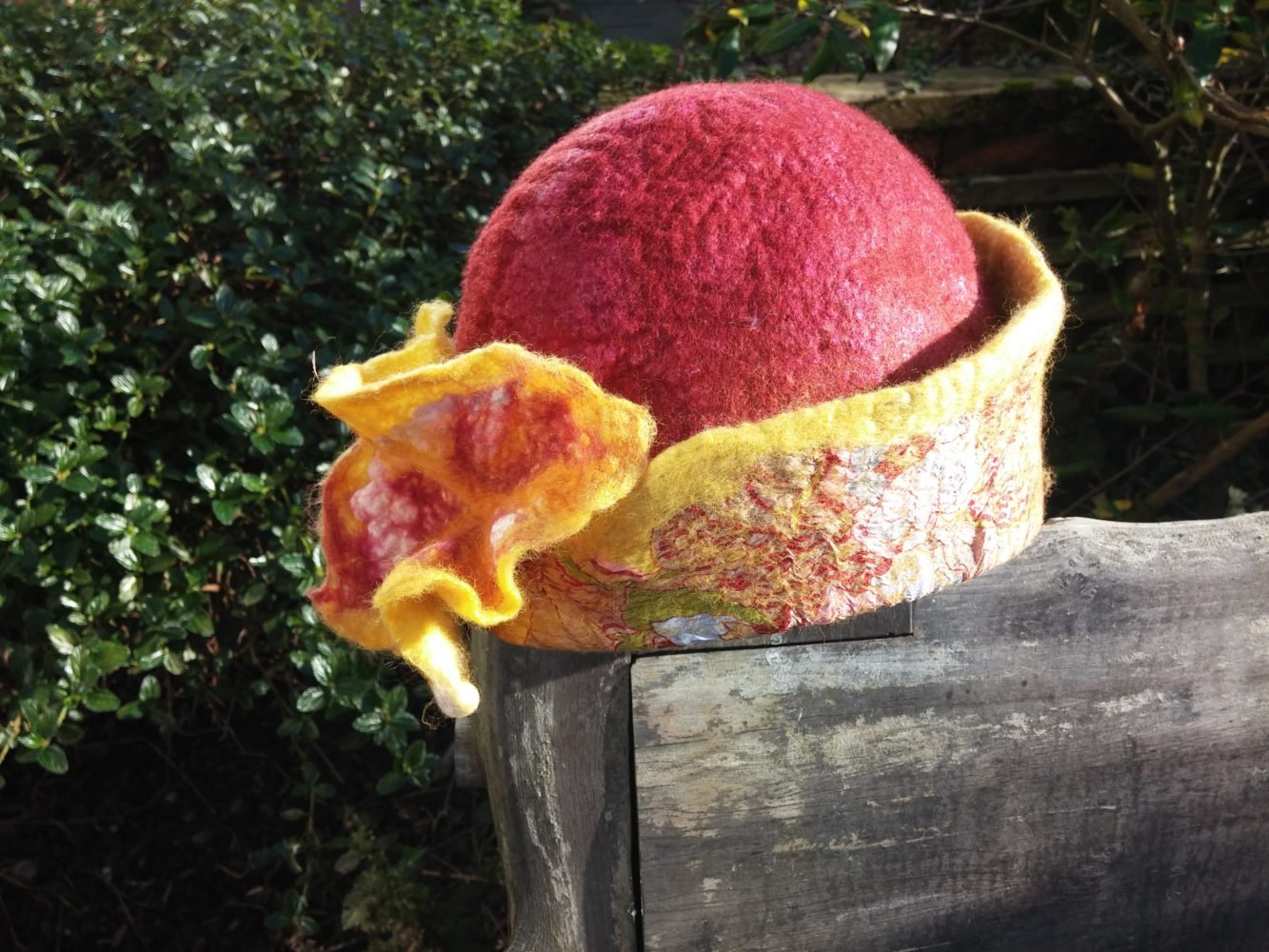 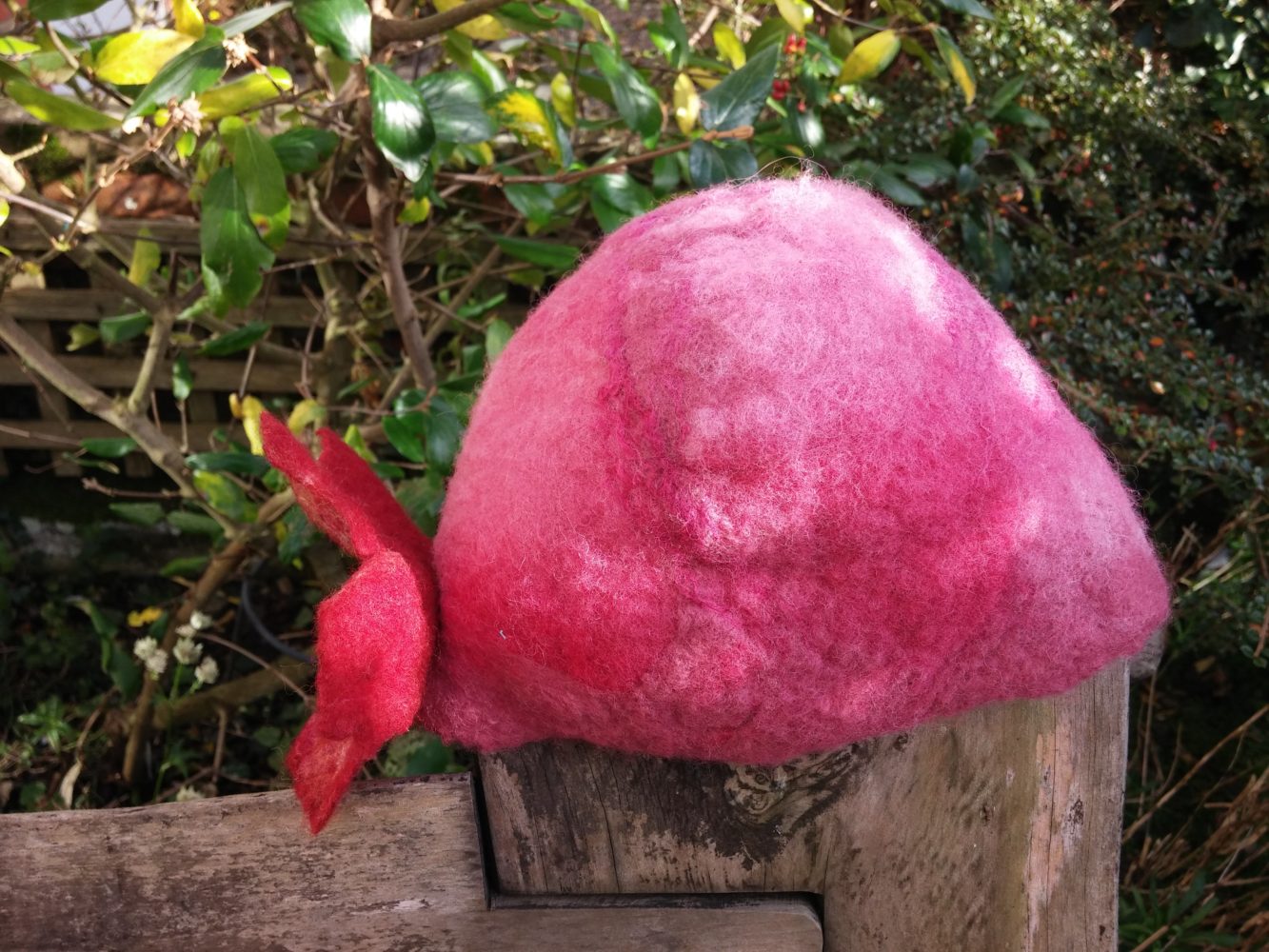 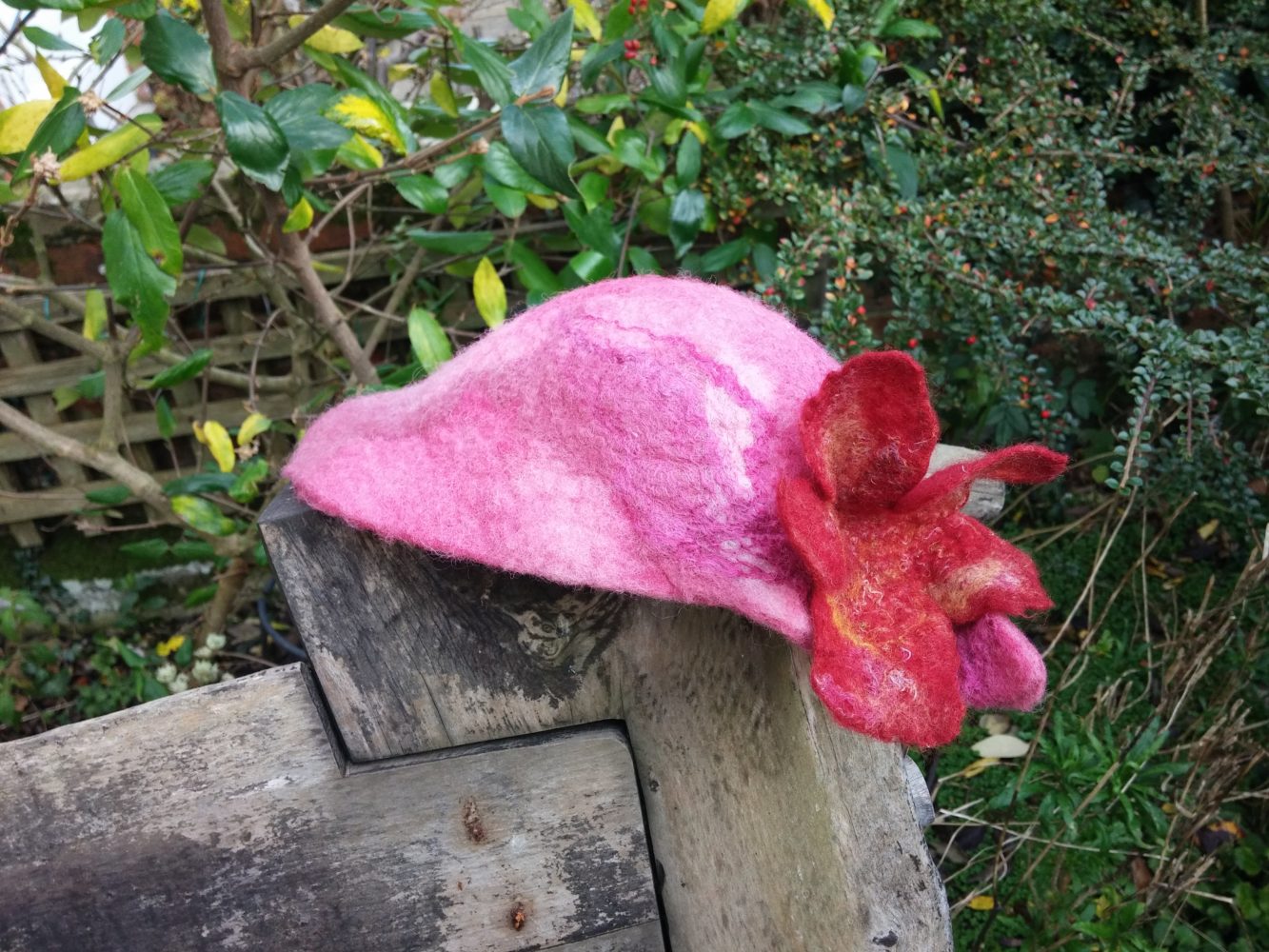 The last two hats were a bit of an on the spot invention to save me from disaster. The hat I was making was coming out more like a tea cosy in shape and I knew that no amount of fulling or shrinking would get it to fit, so I cut it into two. The little beanie hat has a sewn seam down the back and the small fascinator style caplet was made from the other piece I’d cut off. I think I’m going to make a different flower for this hat though, or perhaps a bunch of them.