On the occasional cooler days I have been focusing on creating some wintry goodies, a few scarves and my first concertina hat which I learned in an online course by Teri Berry

I used some gorgeous rust brown sari silk around the brim for some additional texture and strength. 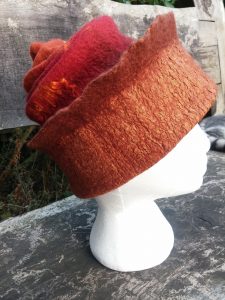 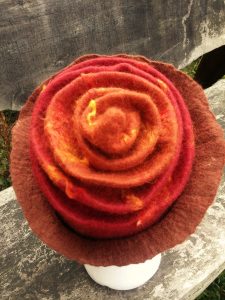 Because I love the textures from nuno felt I have been trying to work with some scarves and pieces of silk I’ve picked up from charity shops or vintage shops. Not all silks felt well, and some of these pieces took a good deal of rolling and rubbing just to get the wool fibres to penetrate the silk fabric. I have learned my lesson now though, so I do a small test section before spending a couple of hours laying out an intricate design only to find out that the wool stubbornly refuses to mesh with the silk! 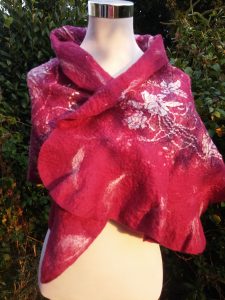 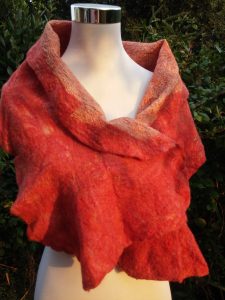 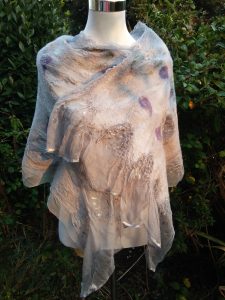 This grey shawl or stole is so lightweight, using only a very fine almost cobweb layer of wool in two shades of grey. I then added some details in purple following the shape of the glittery details. To highlight the glittery patterns I laid the wool out around them and added a thin sliver of dyed silk in shades of stormy grey and purple. The ends I left unfelted as they too have lots of lovely glittery detail.

Then I tried a much simpler layout, still using a very light layer of wool. I was using a blend from Heidi Feathers of rich rust, burgundy, orange and bamboo fibres, so I was as random as I could be in the layout to avoid getting regular stripes. The silk is a very light chiffon in a rather unflattering shade that I can only call American Tan like the tights everyone wanted to wear in the 70s! However it was perfect for this lightweight yet warm autumnal scarf.

The last one here, which was actually the first one I made in this batch, is based on a really gorgeous piece of pink silk with a burnout pattern in silvery grey on one side. I wanted to use wool on both sides of this scarf so as to get the ruched texture on the top as well as some felt and silk yarn details. The ends are all wool as the piece of silk wasn’t sufficiently long on it own for a proper scarf. I also embellished the wool ends and edges with drifts of tussah silk.