Ah the Russian Vine is colouring up on our fence now. Every year, just as it reaches the peak of colour intensity in the leaves, we get a week of high winds and rain which just rips them all off. So this year I’m going to capture their glory in felt and silk. 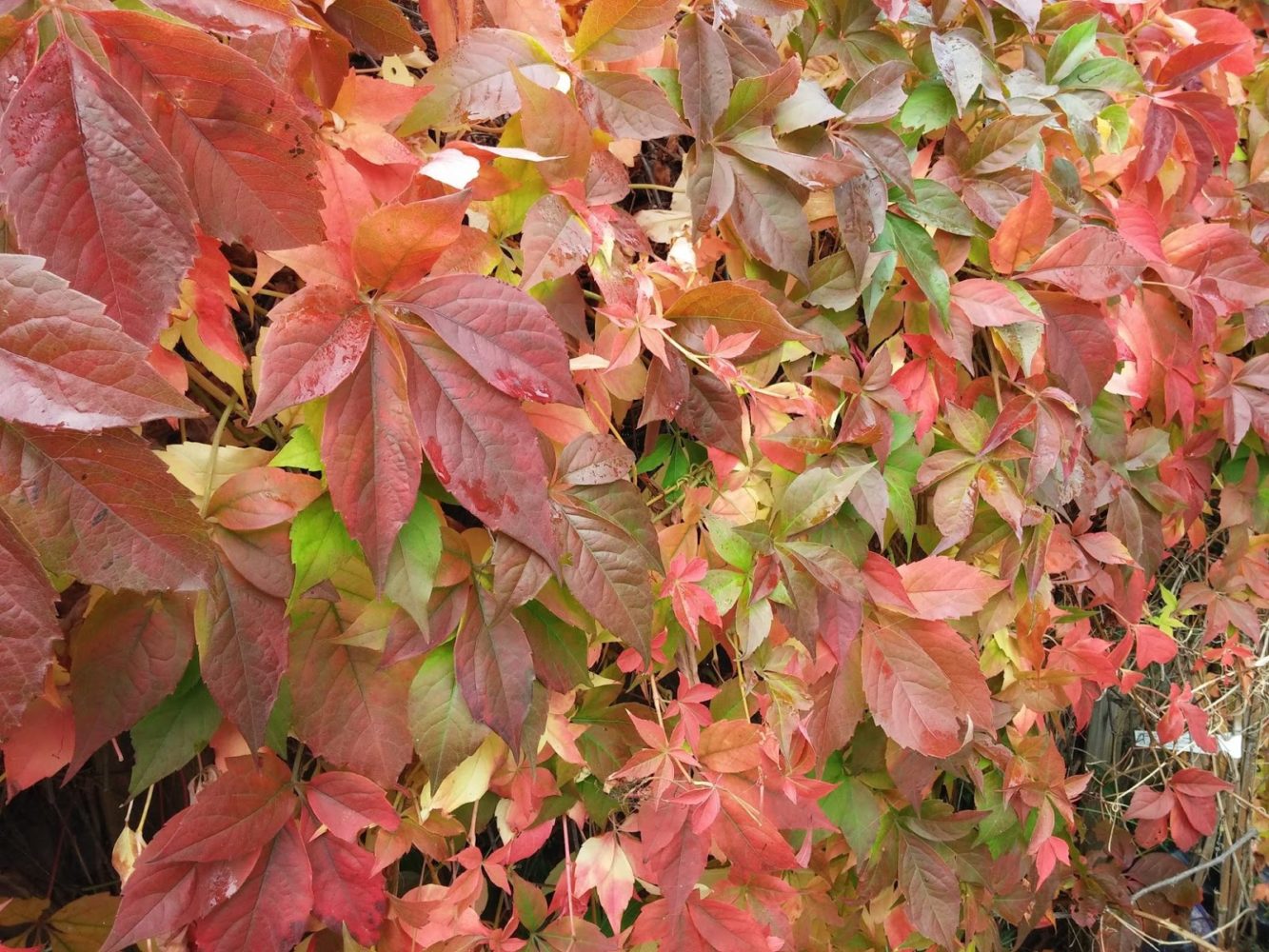 Firstly I made some pre-felt for the leaves just very lightly binding red, green, maroon and a few other colours together into a sheet then cutting out leaf shapes of varying sizes.

I also dyed some silk with those fabulous dyes that can be done in the microwave. (I get mine from Rainbow Silks )  I am a big fan of all things non-complicated and quick and easy and the colours are truly luscious! 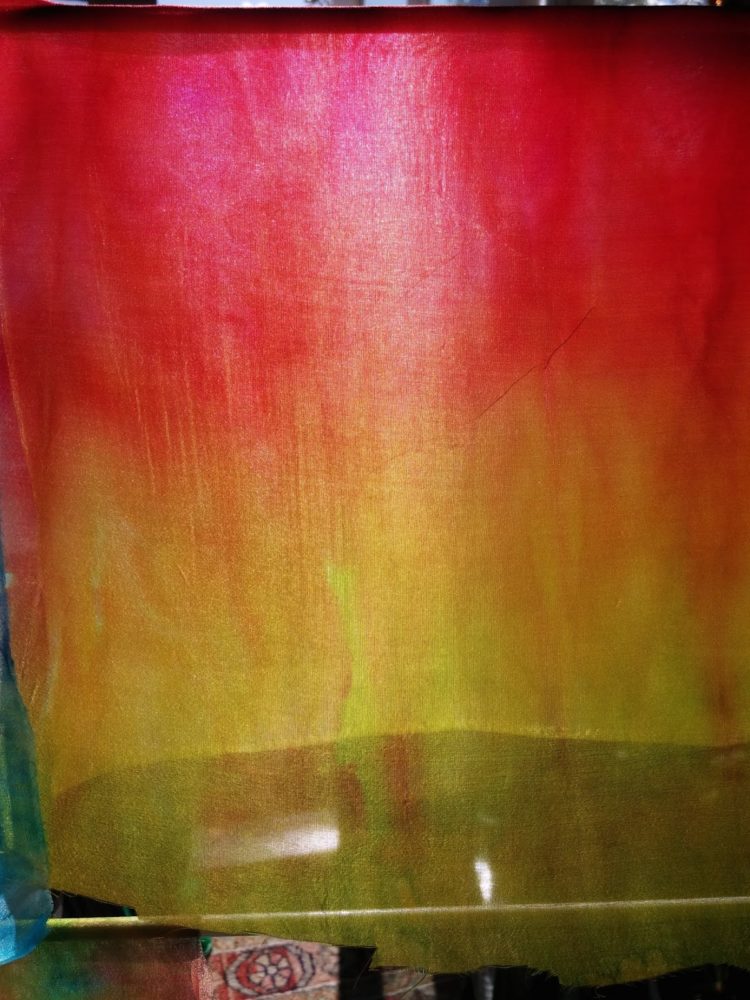 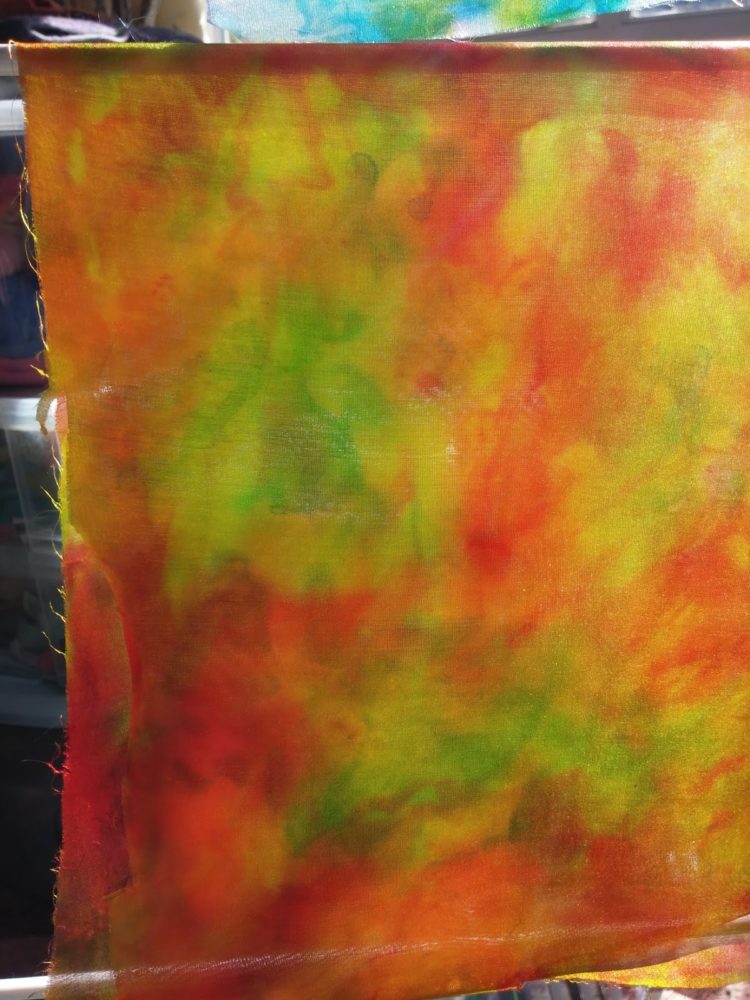 I decided that an autumn sky of pale blue would show off the rich colours of the leaves to best effect. However, being a bit ambitious with this project, I decided to also add a pocket inside the bag, and some silk around the rim on the inside. This made for lots of complications later when it came time to cut out the resist so that the flap layers could felt together! But I enjoy learning this way rather than planning things in detail.

I laid out some fibres in shades of olive green, deep red, orangey red for the inside of the bag. 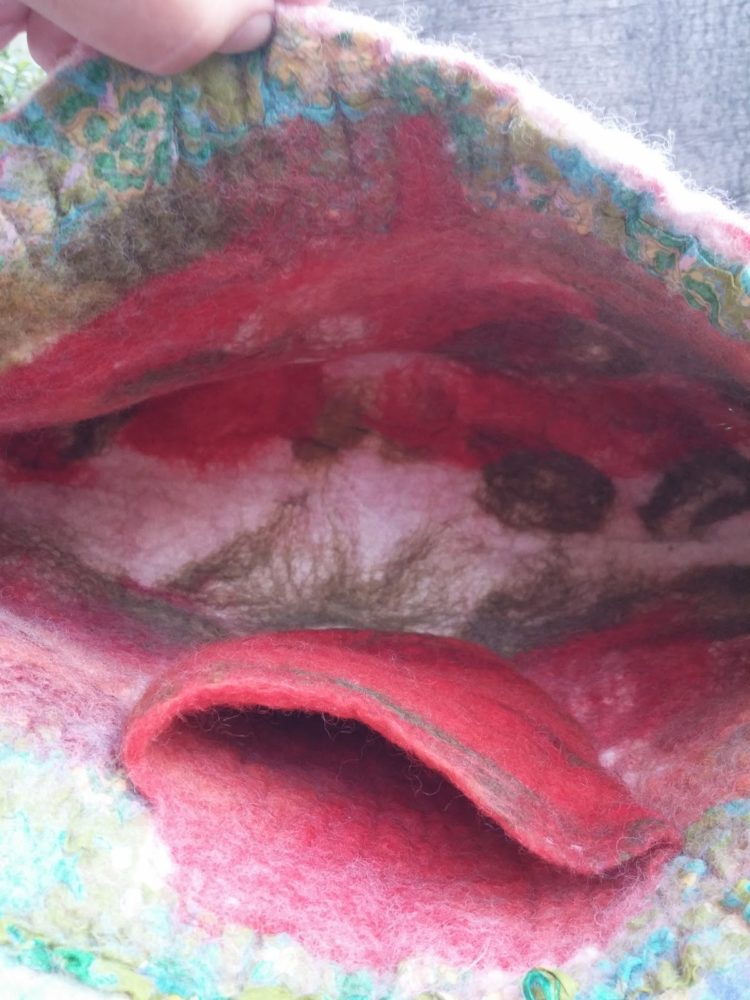 Then I laid out a layer of white followed by a layer of almost pillar box red wool. This has warmed up the white and blue colours after felting as the fibres migrated through. I omitted the red layer on the flap so that it would have just 4 and not 6 layers.

On top of the final layer of white wool I added drifts of varied shades of blue wool for the sky. Then laid out the felt and silk leaves, and a few pieces of curly tops in green and ochre.

Here’s the finished layout before felting. The scraps of silk left over after cutting out the leaves are just sprinkled onto the surface for additional colour and texture. 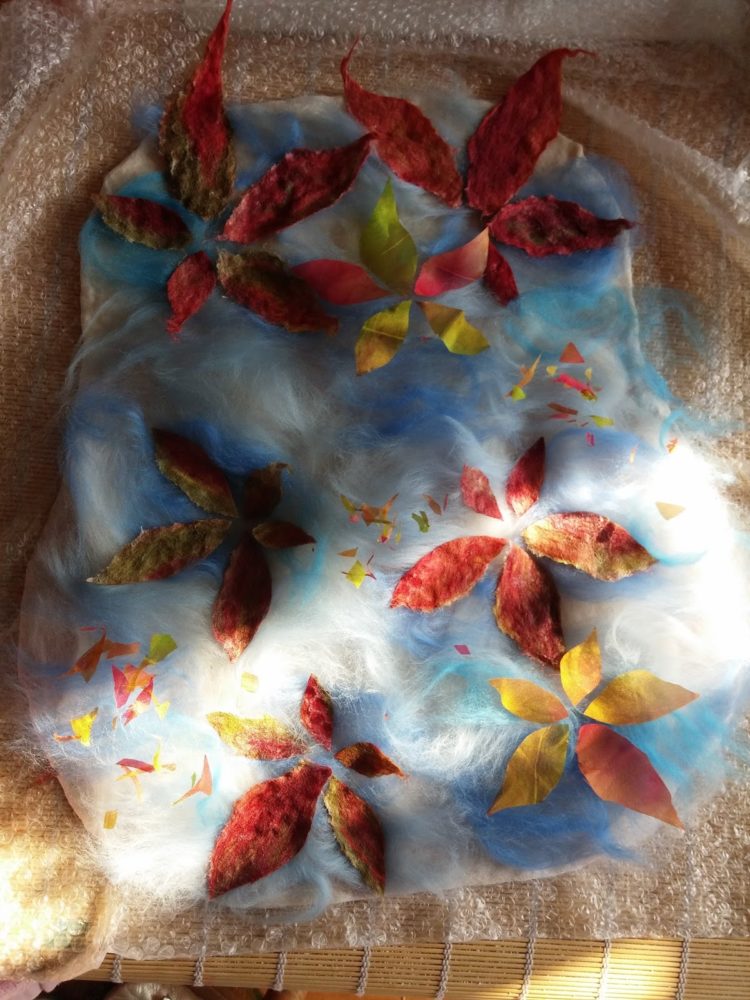 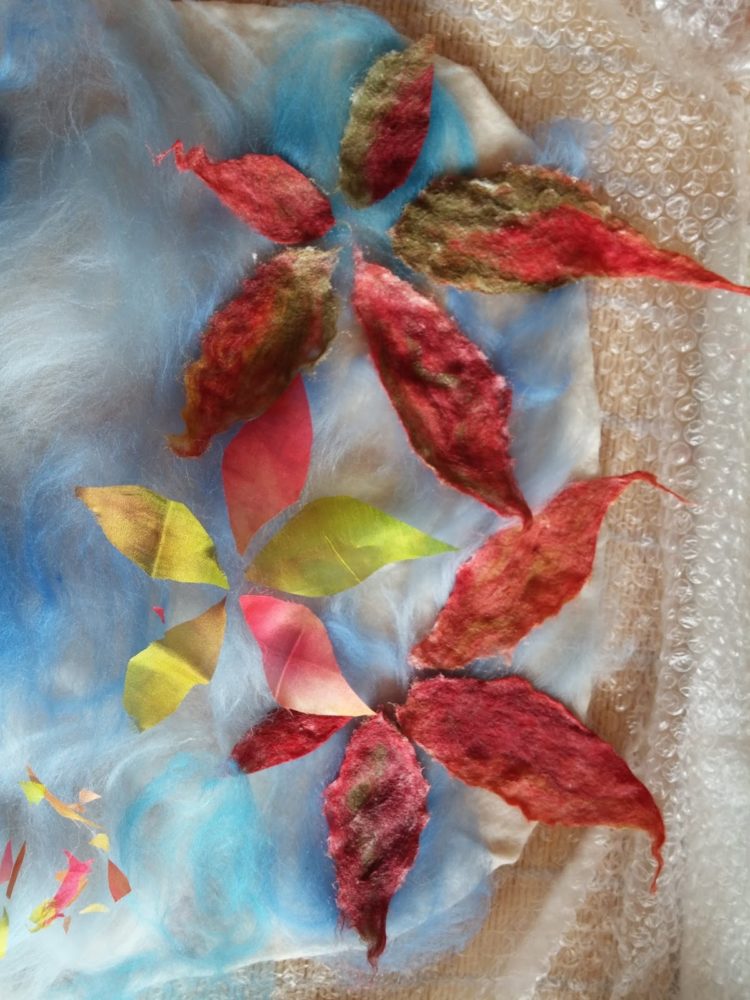 I also had some scraps left over from the pre-felted leaves which I used in the cord for the handle. 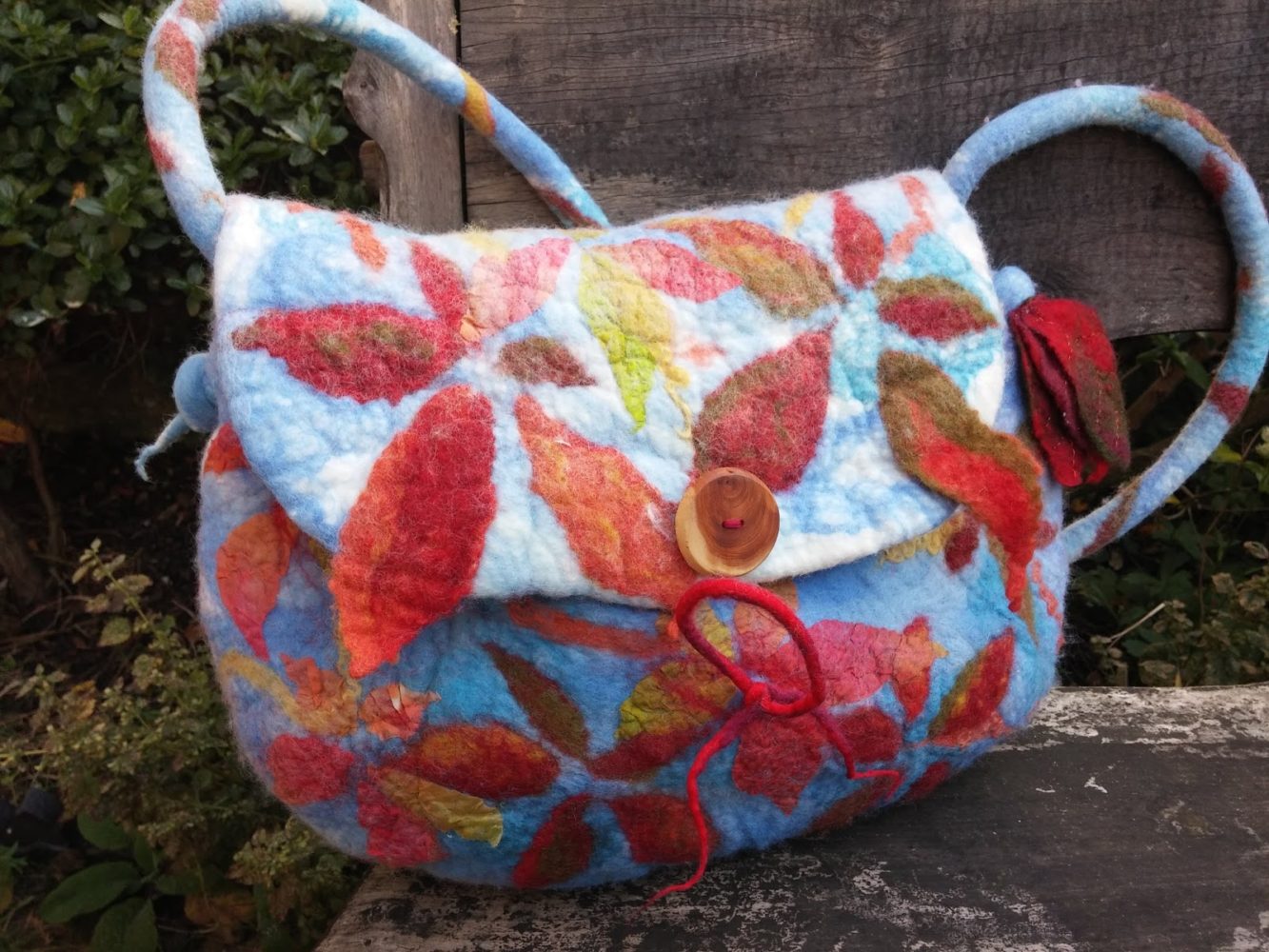 And I made a few more leaves which I sewed onto the cord for decoration. It fastens using a felt cord loop and a yew wood button which my husband had fun making for me from an old piece of turned wood he had picked up in a charity shop. Oh yes, and it also has a pocket on the outside, which I need to find a way to strengthen as it is a bit on the flimsy side, but will hold a mobile phone OK. 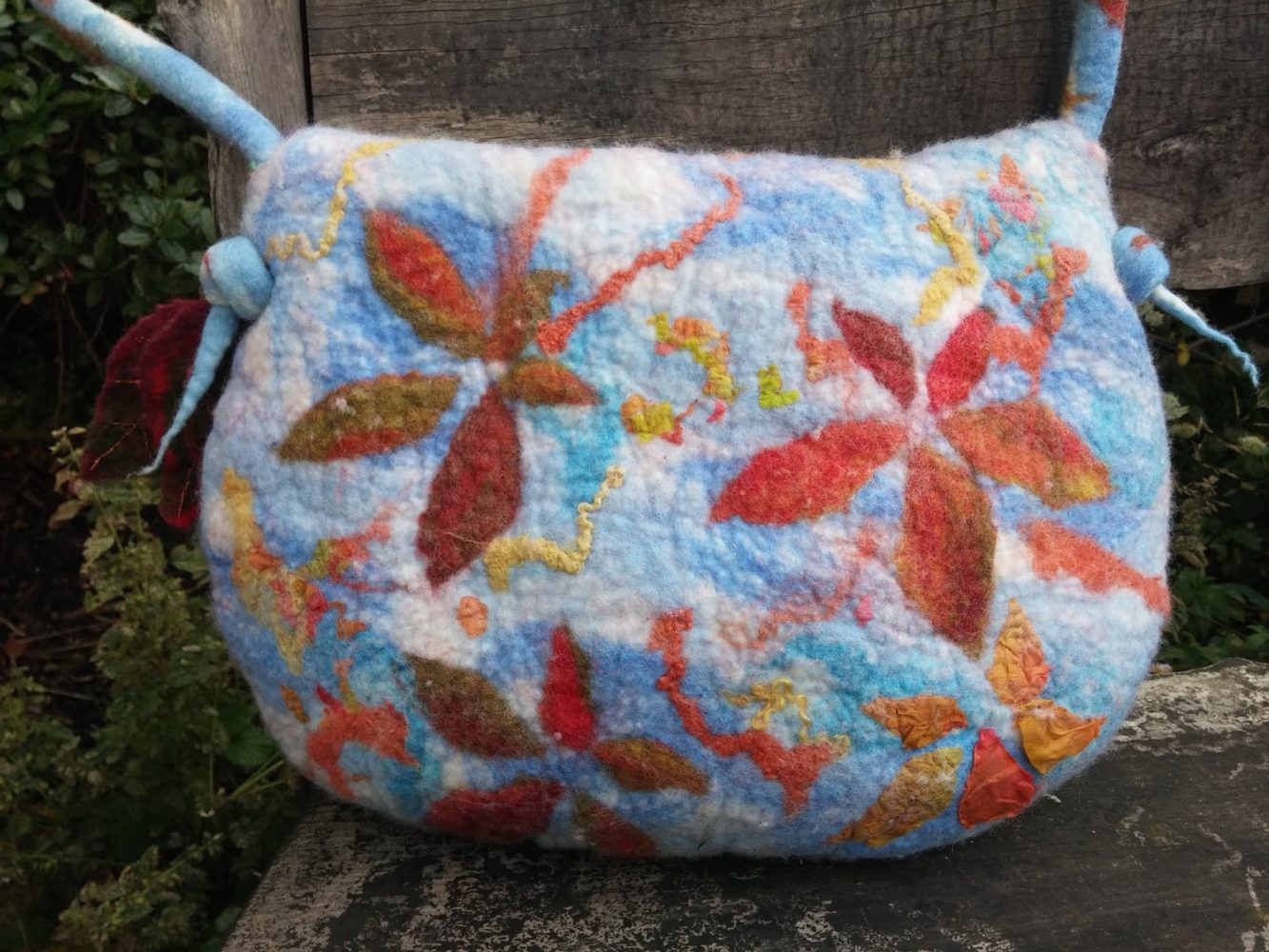 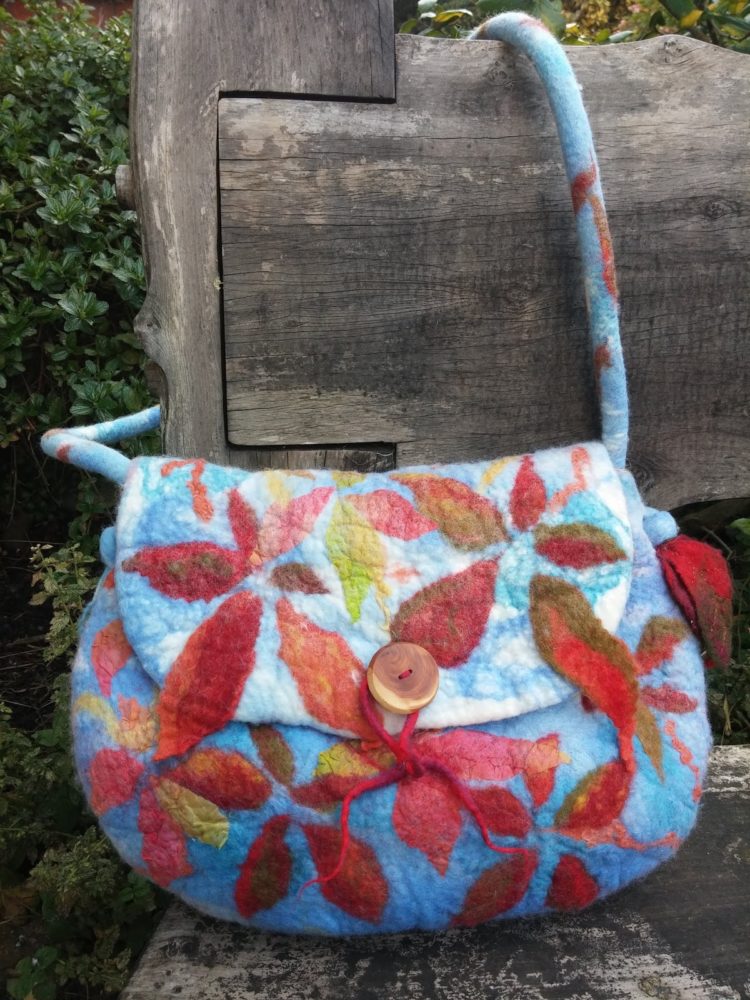 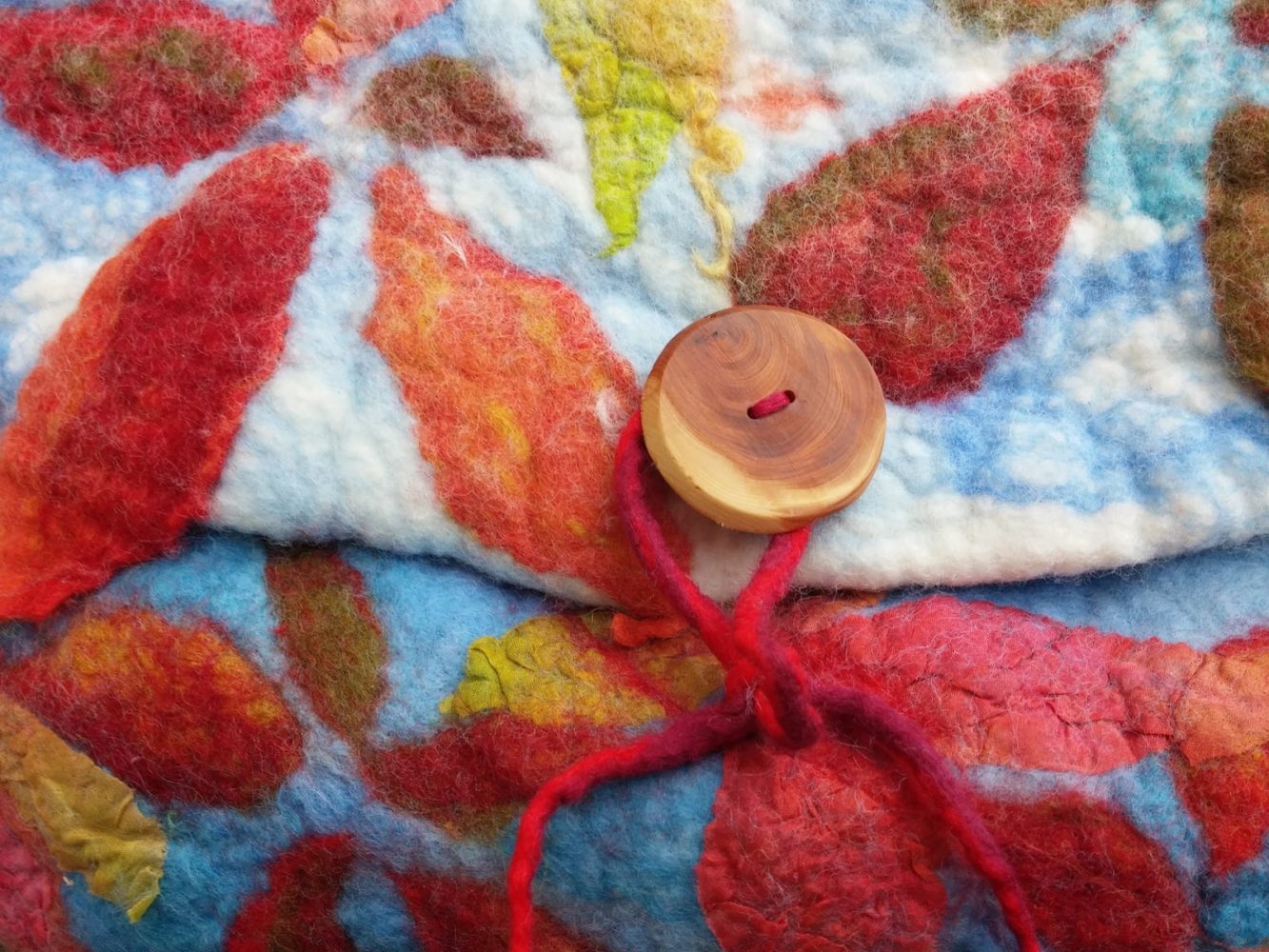 The silk leaves crinkled up nicely, although one or two needed a couple of stitches to hold them in place firmly. 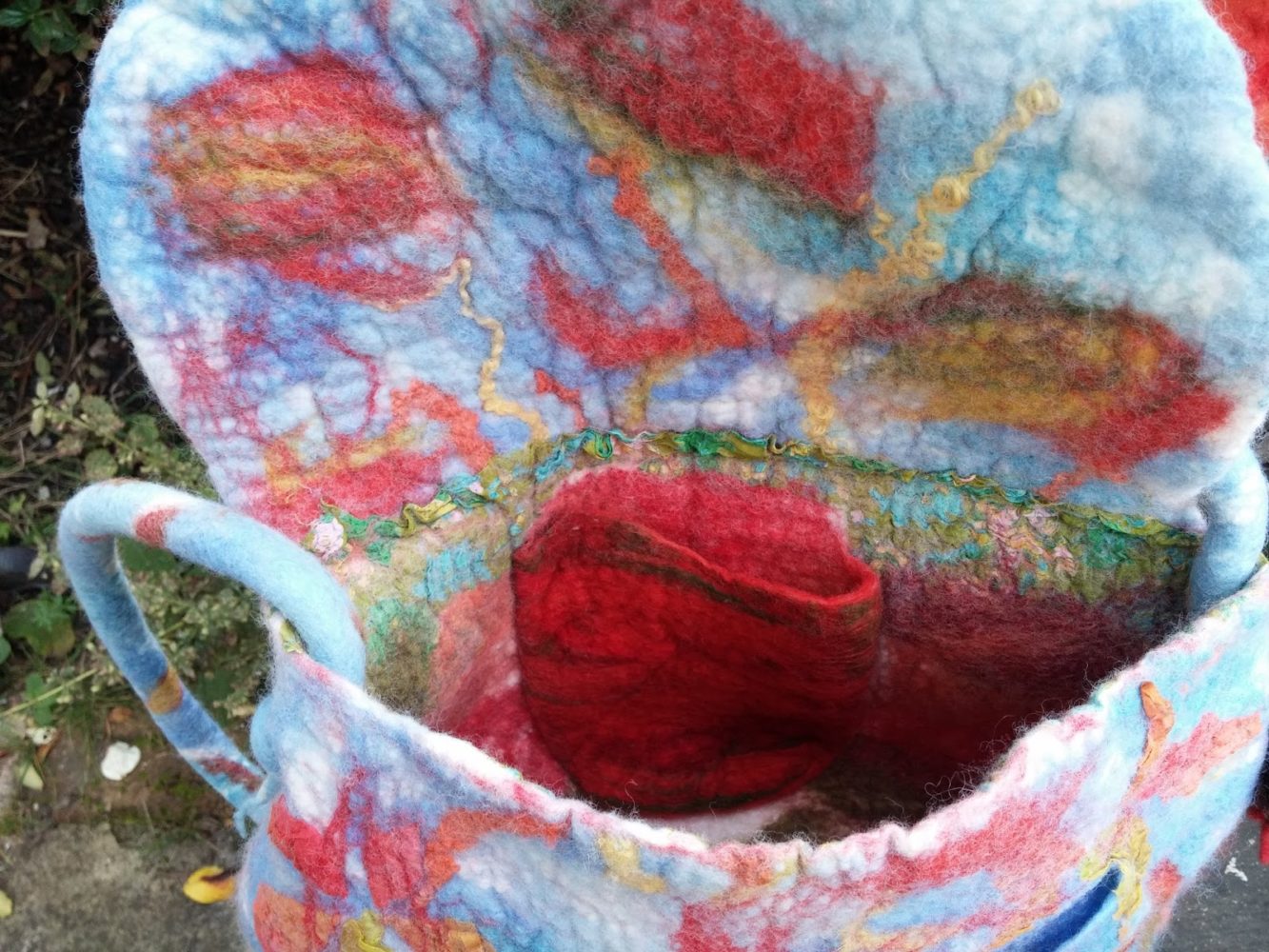 And you can see the silk I laid out on the inside just above the pocket here. I love the colours and definitely want to make some more bags based on natural themes of leaves and flowers. 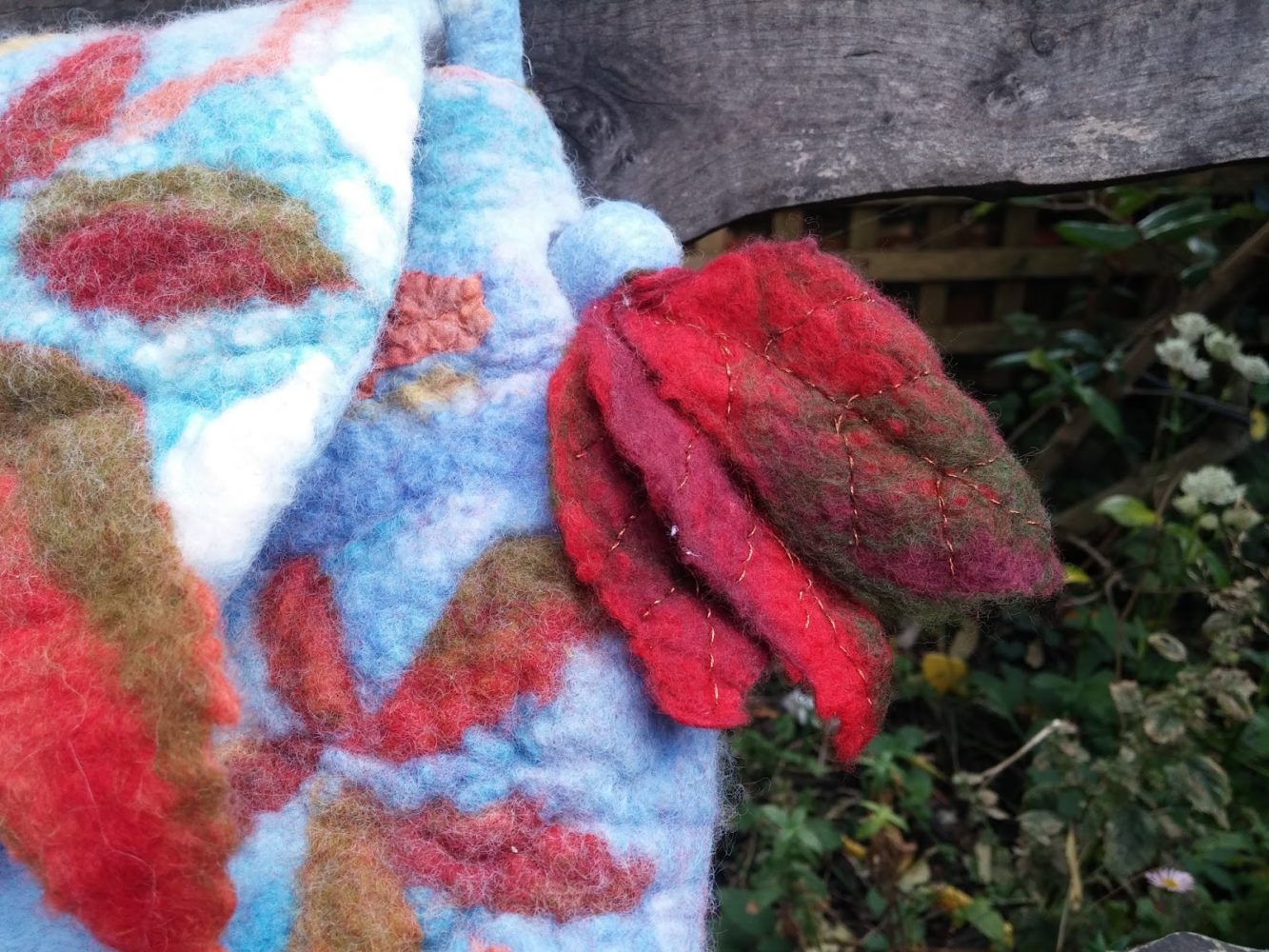 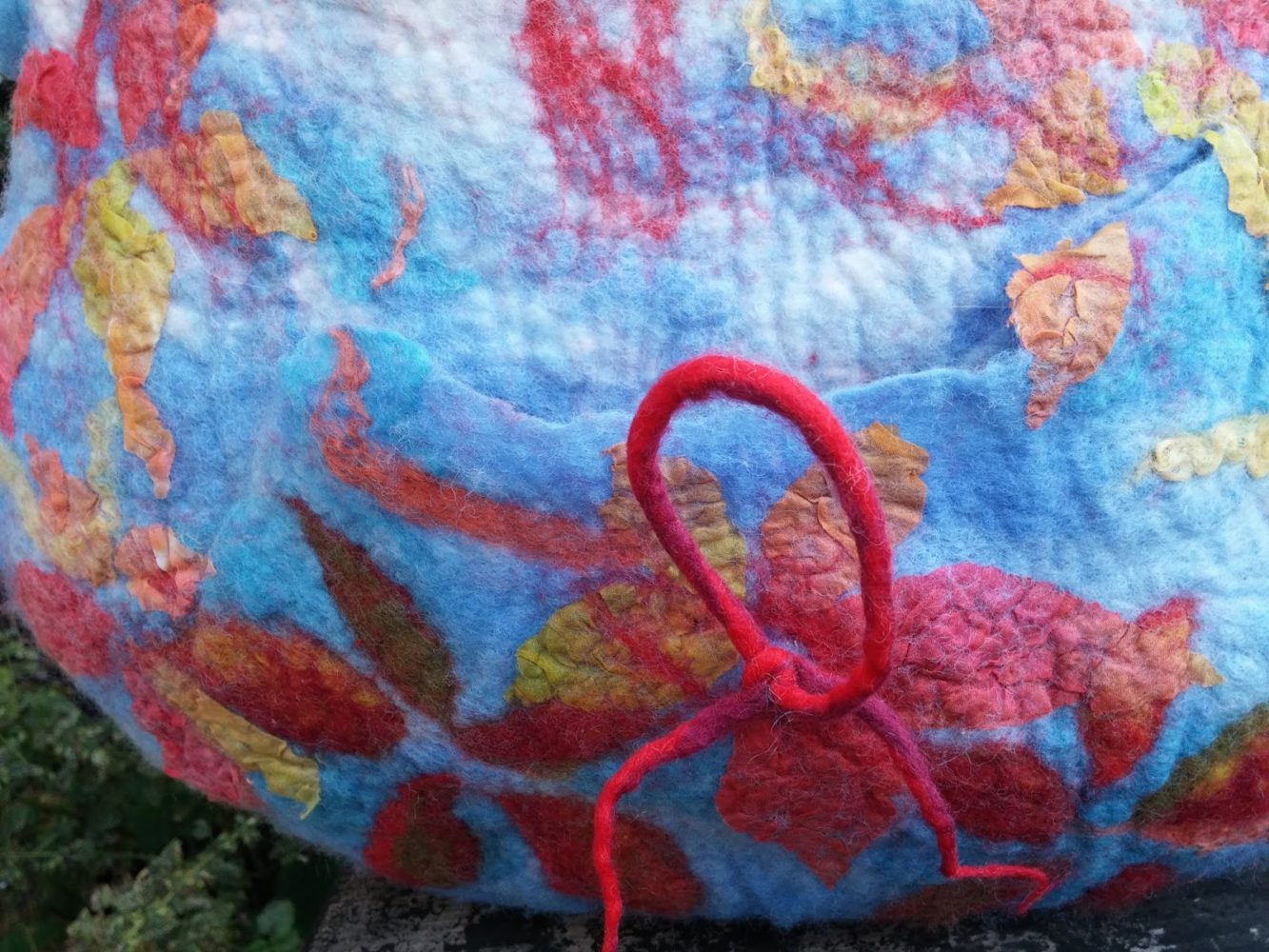 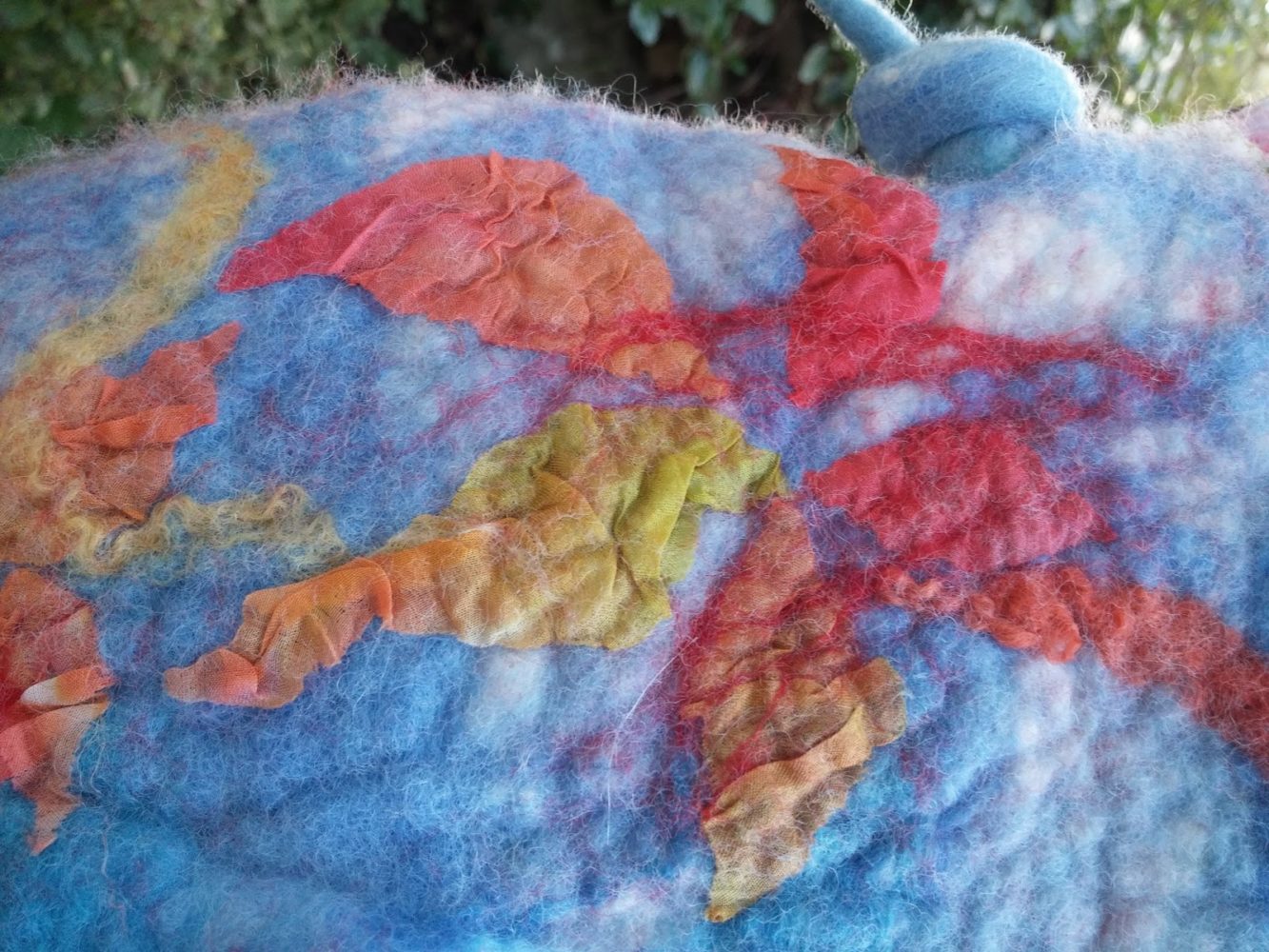