Skip to content
The Pinocchio Solution – from puppet to human 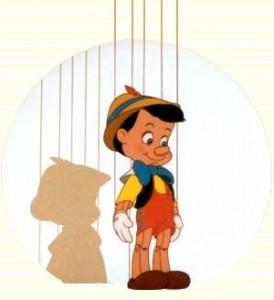 If you want to live your life without feeling as though someone else is always able to pull the strings and jerk you around, you need to find out how to transform yourself from puppet to human.

Fairy tales have a deep and subtle power encoded within them, despite our recent attempts to water them down from their original potent & raw scary nature. This is how we inform our children about the values of our culture, the problems of living a human life and how to discover the solutions. As entertainment they may seem peripheral and irrelevant, but actually this is how we in the West explore our unconscious drives and desires now, in the realms of films, TV shows and books. Jung called it our ‘collective unconscious’ and explored the archetypes that consistently show up.

For people who want to explore the teachings of their favourite childhood fairy stories in real life – and I would hesitate to say that there is a really clear distinction between our fantasies and our reality – then Pinocchio is one of the best and perhaps more relevant today than ever before.

Freedom to be real is what he sought.

And his journey of discovery through truth and untruth brought him to his desires.

Living an authentic life is worthwhile but you may have to go through some trials and tribulations to get there.

We all have some strings attached to us, where someone else can pull us away from our authenticity. These often involve the situations when we become entangled in beliefs about what we ‘should’ or ‘ought’ or ‘have’ to do, most of which are based on other people’s needs.

Then there are the triggers – a word, phrase, the look on someone’s face, our sensitivity to their feelings, something we cannot be present to in the moment – which can send us off into a course of action we may very well regret later. Have you ever, like I have, watched yourself in amazement and curiosity, doing something that you really don’t want to be doing? I’ve been able to observe myself going into an argument that I know will be fruitless, end up with harsh words that aren’t meant and leave me feeling battered, bruised and upset, but felt totally powerless to stop it. It’s as though I’ve been removed from control of my body and someone else is playing with the strings making me act and speak the way I am.

The trigger where I have a few strings still attached, and it’s been playing out almost daily for me, is playing nice to avoid someone else’s anger.What happens is that immediately I detect the trigger, the authentic me is pushed to one side, and this puppet me plays out the same strategy that I learned as a child, to appease, to be reasonable, to listen and to show that I care.

As Shelley Klammer so honestly explains it in her blog (Creativity Portal.com):

I have long questioned the validity of niceness as it has been my primary way of not being honest in my life. It is one thing to be deeply kind, and another to be nice as a way to disappear and not express myself. In my own psychology I have used the pattern of niceness to “disappear”, to solely focus on making the other person feel good, while revealing little of myself.

This is why it is so effective as a protection, this disappearing act effectively removes you from the scene. When I do this I become the audience in the puppet show, identified neither as the puppet or the puppet master. My authenticity has been sacrificed for survival.

These triggers happen instantaneously so it is only through developing conscious awareness that it’s possible to spot them happening, and that’s usually after the event. Unfortunately we don’t have anything quite as evident to ourselves and other people as Pinocchio’s nose to reveal when we are doing this disappearing act, when we abandon our authenticity.

Bach and Goldberg, authors of Creative Aggression put it this way:

The “nice girl” tends to create and atmosphere wherein no one can give any honest feedback. This blocks her emotional growth.

The “nice girl” stifles the growth of others, since she never gives any honest feedback. This deprives others of a real person to assert against. Others feel guilt and shame for being angry at the “nice gi

Nice behavior is unreal; it puts severe limitations on relationship.” 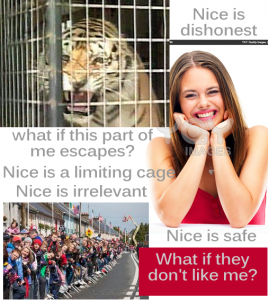 My picture journal about being “nice”

I have been very accomplished at disappearing. It’s partly who I am, to be hermetic, to retreat periodically but then I can become stuck there, afraid to become visible and emerge again because I think that means I have to deal in a world of painful feelings; humiliation, embarrassment, anger, guilt which is what relationships bring. But that’s not all that I get from relationships, and unfortunately being the invisible hermit has also hidden me from the joy, companionship, love, sharing, support, encouragement and fun to be found in authentic relationships.

So just as Pinocchio had to learn that to be authentically human he had to be honest, so too I can find ways to be present to myself in those triggering moments, and to realise that what I used to fear would happen to me when I was very young and inexperienced is not the only possible outcome of being truthful. I am not going to die because of it. At most I will feel, momentarily, some uncomfortable feelings. But that too will pass. And there is much more of the authentic me that I am aware of today that anchors me into my reality, like Oddysseus tied to the mast so as to hear but not follow the alluring song of the Sirens. I can navigate the emotional world tied to the security of my inner truth, and thus cut a few more strings.

Here are some ideas that I’ve played with to help me to see where I am not achieving the authenticity that my deep inner longing is searching for:

1. Creative visualisation – Take a few deep and mindful breaths. Imagine yourself as Pinocchio or a puppet. When you feel how strings pulled by other people make you do things whilst you feel helpless to act otherwise, who comes to mind? Which situations do you find yourself going into puppet mode? What do you feel in puppet mode – is it safe? Is it easier? Are you afraid of people bringing painful and difficult feelings into your life? How strong is your inner desire for that authentic human experience? Can you be honest with yourself about your needs for safety and security? Can you be vulnerable and safe? How would you like to feel in these situations? Imagine yourself free of all strings, Pinocchio becomes real boy ….. and note your feelings, thoughts and behaviour differences.

1a. Ask & Receive It’s one thing to become aware of the problem. Then the next step is to create your own solution. You can do this by first accepting the ideas and images and feelings that came into your awareness with the creative visualisation – without trying to change them (the mind does like to take control at this point but just observe and accept that without listening to its advice!). Then over the next few days and weeks, be aware of what other information comes forward, maybe from books, Facebook posts, emails, other people, experiences …… this is all your creative inner self solving the problem.

2. Human Design has given me the first clues about my own inner authority. From there I explored and experimented to discover what this really meant for me.

3. Wild Mind Writing – a version of journalling that has taken me deeply into accessing unconscious thoughts, beliefs and feelings. Writing just whatever is there to be written, with no requirement for formatting, making sense to anyone else, allowing an inner voice to speak through my hand rather than my mind. Sometimes it has brought me to a place of stillness where I can converse with my inner intelligence (some people call this Higher Self).

4. Creative Picture Journal – use images that speak to you to compile a ‘scrapbook’. You can use magazine pictures or online ones as I’ve done, and add some text or colours. Then put it away and come back to it 24 hours later. Has anything changed in your perception? Have you learned something as a result of compiling your picture journal? Look back at last week’s pictures – are you still the same now as you were then?

You can learn more about Spontaneous Collage where Shelley offers free e-courses at http://www.expressiveartworkshops.com/

Your own authority – no strings attached!