Here are some of my thoughts from exploring the I’Ching Hexagram 59 Dispersion – The gate of sexuality; breaking down barriers to intimacy.
Gene Key 59 Shadow: Dishonesty  Gift: Intimacy   Siddhi: Transparency 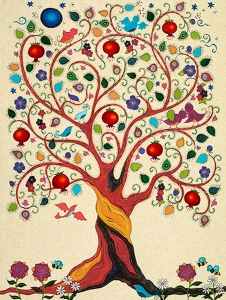 Human Design & GeneKeys is based on the concept that the hexagrams of the I’Ching are actually our own DNA. They are the story of our life experiences and potential for expanded consciousness.

What I have long held as my personal theme in relationships is feeling rejected, alienated, an ‘outsider’ and ‘black sheep’. As a child and into my mid life, I never felt I truly belonged to one friendship group. What happened was that I would attach myself  temporarily to a group, then feel restless and move onto a different group. I didn’t feel good about myself doing this, because I could see and feel I was ‘different’ to those people who had a stable friendship group. They had what I yearned for but couldn’t make happen. Not understanding then that I had personal responsibility for creating my reality according to the Law of Attraction, I looked for someone else to blame, and counselling/therapy gave me the tools to blame my parents!

I even discovered some really good stories to hang all that blame on from times I couldn’t consciously recall. For years this story became the focus of my blame: If only they had been better parents, my suffering wouldn’t have arisen and taken the form it did. Of feeling an outsider, a ‘black sheep’, rejected and abandoned.

Over the years I tried to resolve this pain through sexuality, seeking to merge myself with another. Or turning away from physical intimacy altogether because it threatened to expose my vulnerability. All of these were dishonest expressions of me, as I strove to hide my inner most shame, the belief that there was something so flawed about me that caused my rejection and outsider status, which if people saw it would make them turn away in horror never to be seen near me again! Intimacy cannot thrive where there is dishonesty.

Years later, I can see that this was a creation of my own, that I wasn’t the victim of somebody else’s oppression, but responsible for the perpetuation of something I had perceived as rejection. This may seem harsh but by exploring my own responsibility I have been able to bring deep compassion to those experiences instead of hoping or trying to manipulate someone else into fixing ‘the problem’ for me. Responsibility means taking up the power to choose differently once a painful story has been revealed.

The Shadow side of this energy, which I carry within my cells, was actually a gateway through which I learned tenderness, intimacy, forgiveness and compassion. Awakened trauma becomes compassion. I gradually realised how I had become entrenched in my beliefs about being different, about not fitting in. My focus on being different was a perfect way to exclude myself, to avoid and protect myself from the fear of being rejected or abandoned. 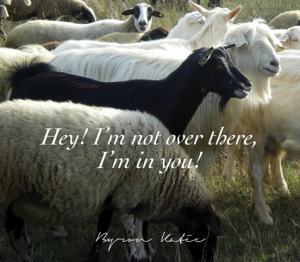 Life has brought me many experiences around these themes of intimacy, shyness, rejection, exclusion, separation and belonging. I have been able to see through my own patterns, to see how I blamed others for my own choice to keep excluding myself. How I protected myself from a feeling that, when I did eventually allow myself to be willing to feel it, was acutely painful but I didn’t die, which is what I was expecting!

Belonging is a deeply tribal function and feeling; our history as human beings has been one of survival through belonging. Exclusion from the tribe would have meant death in centuries past; being branded as ‘other’ or ‘different’ could mean being drowned, hounded out of the community, or being put to death as a witch, an undesirable, a malignant influence. All these responses are based in fear and the genetic need to differentiate. We cannot intermarry and produce healthy children, so we need to bring in someone who is of different genes, different blood, but not so different that we and our children might not be cared for, nurtured and supported by the community in which we lived. Who is ‘in’ and who is ‘out’ is the deep tribal theme of this hexagram 59.

Whether difference is perceived as good/healthy/desirable or bad/unhealthy/threatening is due to our stability within ourselves. This sense of inner stability and power develops best through a feeling of belonging to some kind of secure family, community or tribe. By seeking somewhere to feel a sense of belonging, we are therefore including some and excluding others based on sameness vs difference. 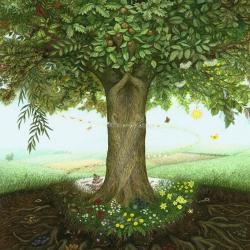 As consciousness of the suffering that difference brings has risen, through the media and internet as well as in our personal lives, a deep desire has arisen to expand and include more ‘others’, to develop true intimacy and transparency within relationships at all levels. It is this desire that I see underpinning our focus through spirituality on the experience of Oneness. To leave behind the need to identify someone as different based on the colour of their skin, the religion they follow, the boundaries of their country, their gender, their sexual preferences, their body shape and size etc.

The desire to discover this kind of intimacy can grow out of feeling alienated or rejected, different, not belonging. When we begin to feel the pain of this with true awareness, refusing the reactive or repressive state, and open to our own vulnerability, intimacy grows. Instead of blaming others, we can soften our own barriers, and discover how much we include or exclude ourselves in community, family, tribe, world community, all of existence.

The principles of how we care for others arise from our sense of being joined together in our experiences of pain and suffering, joy and love. Whether we take that pain and act unconsciously to try to relieve it by inflicting pain on another or can consciously step up and reach for our compassion to help another is how we are evolving our emotional awareness and development of more respectful, caring, compassionate, joyous, honouring, loving and peaceful relationships.
I believe that wherever we see oppression and conflict outside ourselves, there is an opportunity for us to choose to create our reality that has more of those values we want to see in our lives, to use our joined-togetherness sense so we can contribute towards a better world through our own personal choices.  We can say “I don’t like this and I don’t condemn the people involved on either side – it is a helpful experience if I choose to use it to increase and ramp up my desires based on the values I hold dear“. Whether that leads to aligned action to take steps externally in our own relationships or on the wider human stage, perhaps by signing a petition or volunteering or paying money to a charity, it is our choice and intent that holds all of our power to choose differently and change the world.

I see many ways in which people are challenging the divisions we have made, whether gender-based, religion-based, sexuality-based or ethnicity-based, as we evolve a new awareness of the commonality of bonds through feeling. Through joy and suffering shared, we can discover ways to include ourselves, include others and dissolve our barriers to deeper intimacy and compassion. This is how we individually bring oneness to the world and how we can possibly deepen our compassion for those involved in warfare and conflict, embroiled in the fear and oppression of difference. We can discover how peace arises within when we are open, honest, vulnerable, trusting and break down our own internal barriers to intimacy. I feel a deep and expansive sense of peace within as I bring this decades old conflict within me to an end, and experience tenderness and compassion towards myself and others who still feel the sharp sting of the pain of not belonging.

I want to end with some edited quotes from Richard Rudd’s Gene Key 59:

“We create fear and distrust through our relationships and it comes from our genetic need to survive by mating with someone who is different enough to us to create genetically viable children whilst also similar enough to ensure tribal/family support and nurture for our children.
This means that life has been holding humanity back from realising its higher nature – life needs human being to be afraid of each other in order to fulfil genetic potential in this current stage of our evolution.
If we were not afraid of each other, we would have interbred, there would be no social, political, geographical boundaries, no genetic differentiation, no art, religion or cultural colour. Everything in evolution serves its purpose and has its time.”

Intimacy is all about knowing and loving each other’s idiosyncrasies:

Our choices have consequences: They make the world a more dangerous place or they cultivate peace. Fear and judgment deepen our collective wounds.  That rare mix of courage and compassion is the balm that brings global healing.