Skip to content
Reshare by Robin Rice: How To Get Angry Without Losing Your Enlightenment

NOTE: I wanted to share this as it’s the best piece I’ve read about real genuine anger in a spiritual context. I’ve struggled with anger all my life through depression and illness, until I came to see it as useful, and learned ways to use it. There is a great creative power within anger. 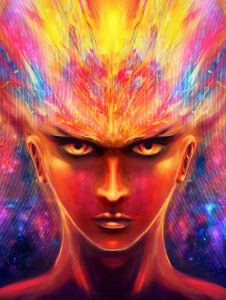 “Anger. It’s a bad thing, right? It’s low-brow for spiritual types. Better to “OMM” your way through, don’t you think?

Anger is not primitive on the journey of enlightenment. Jesus overthrew the tables when he got angry at the moneychangers. Buddha might have been grieving for the world at large when he left his wife and child and the life of a prince, but my guess is he was also just a wee bit angry that his family shielded him from the true nature of the world for those less fortunate throughout his entire early life.

Anger is real. It’s normal. It’s natural. And I believe it’s holy, in the right expression.

My good friend Eve Bruce says, if you’re not depressed, you’re not awake. I say, if you are depressed, it’s pretty likely you are angry. That’s not philosophical blowing smoke. I was clinically depressed from age 11 to age 35.

Of course, I didn’t know I was angry. I thought I loved the world and people and nature and everything. How could I be angry? Yet every psychic/healer/seer I ever met said I was angry. After a while, I had to consider it might be true. But what was I angry about?

No, seriously. The world was just plain screwed up, people were mean and ugly to each other, there was no real soul to anything, and suffering was a constant for too many people, not to mention animals and the earth itself. What’s NOT to be angry about?

Once I tapped in to those feelings, it was like striking oil. Everything gushed anger.

The human condition? A shit-bag, flea-infested, rotting corpse, if you asked me. Mean people suck. Well, yes! And because of them, bullied kids kill themselves. As. In. DEAD. So mean people don’t just suck, they are living, breathing terrorists. And everyone, including the school principal, is okay with this?

I fumed: How could you look around and not see all there is to be angry about? How could you not rage? And then, once the depression turned to what it really was—pure, holy, hot anger—how could all this be going on with no one  DOING something about it? How can we all just sit here and pretend it is all just the way things are?

As any of you who know me well can attest, I’ve gotten over the emotional bleeding-out aspects of a lot of it. I’m not a festering pool of angry goo. The rolling aspects of my anger does not spew out onto others. But that doesn’t mean I’m not angry.

It means I let my anger move me.

Have you ever seen a pot boil without the waters rolling? Of course not. It’s the nature of boiling water to roll.

It’s also the nature of anger to move.

Try to be angry and sit still. Oh sure, if you are trying to release the anger, or transcend it, or stuff it, you can sit still with it… with a lot of effort. But to let the anger be what it is, to have it’s say and to move you, you must move.

Imagine a woman who is beaten by her husband. What happens if she gets angry? She doesn’t just sit there. She doesn’t take a long pull on her cigarette, a glazed look in her eye, and silently hope he got it out of his system for good this time.

I know about this first hand. Not because I was hit, but because I was in the next room when a woman I babysat for was beaten to a pulp by her husband. I was 13 years old when I woke to the sound of a fist hitting flesh. And screams. And pleading. And drunken swearing. And a telephone being ripped out of a wall.

He didn’t know I was there, and terrified, I slipped out the back way and to a neighboring house to call the police. Thing is, she didn’t want me to do that. Apparently, it caused more trouble.

When I looked at her the next day, her face black and blue and her lip cut wide open, all I got in response to my naive “How can you stand it?” was that long pull on the cigarette, that glazed look, and a shrug. I never saw her again.

She didn’t let her anger move her. But I let it move me. Not right away. Not until I got past my own hells and my own depression.  But I did. And I still do.

It’s not low-brow to get angry. It’s sane.

Being a “spiritual” teacher (a term I don’t always like), many expect me to be nicey-nice, to be gentle and calm and well, spiritual-like. They get uncomfortable when I don’t play it that way. But as Molly Ivans, the New York Times reporter and syndicated columnist, said: “What you need is sustained outrage.”

She knew, as I did, that anger is an appropriate response to the violent, unjust, and deeply damaging things you see out there in the world. It’s a force for good, if used wisely.

How do we sustain a healthy anger, and yet not let it eat us alive? How do we move with our anger, embracing the truth about the ugly world that comes at us from a thousand directions, and yet not become just another angry person? How do we not take on the ugliness ourselves?

Creativity is the only way I know to let the pot come to a rolling boil inside you and not scald everyone in your path. Creativity needs fire. It needs energy. And anger is as good a fuel source as any.